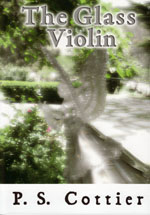 This debut collection by Canberra poet, P.S. Cottier, is striking in its eclecticism. Nothing much escapes this poet’s perceptive eye; her world is crowded and busy, and her poems reflect on and respond to a wide range of mostly contemporary topics and ideas. These include, among many others, injustices (big and small), the marginalised and forgotten, environmental concerns, as well as the nag of the everyday such as how to dispose of a tea bag responsibly or how to take care of one’s teeth. The poems in The Glass Violin are presented in, what appears to be at first reading, a random rush of responses to the arbitrariness of life in the 21st century. But a careful reader will soon discern that there is a sharp, ordered poetic intelligence at work in these mostly short, accessible poems.

The eponymous poem opens the collection and begins with the aftermath of a cataclysmic event, possibly the Holocaust, which then becomes an introductory marker for Cottier’s times and preoccupations. The violinist plays Klesmer music on his glass violin and we arrive in the poem just as ‘the party has closed’. We follow the bloody footprints of the interrupted dancers whose feet have been cut leaving ‘prints of red’ through the collection like a ‘musical bloodhound’. The poem is overtly romantic in its diction with mention of a ‘glass violin’, ‘a crystal angel’ and a ‘questing bow’. It can be surmised that the glass violin itself is a metaphor for suffering and for beauty as both are so strongly evoked in this particular poem and their juxtaposition is signalled and pronounced in many of the poems that follow.

Suffering and cruelty are present in the collection’s stand-out poem, ‘Teaching a lesson’, a chilling depiction of a malicious incident. The poem is measured in its form and tone; its quiet reportage underscores the terrible righteousness of the ‘pedagogical old man’ who imprisons a bower bird in a chicken coop to teach it a lesson:

I know it’s there, he said. I am teaching it a lesson
It stole old seed. They’re bad birds, those bower birds.

Cottier describes the bird’s imprisonment with a keenly felt sensitivity to the frantic bower bird’s ineffectual attempts to escape from its cage of ‘wire walls cutting wings’. The beauty and fragility of the bower bird is conveyed in the alliterative description of its movements: ‘thin airy bones pushed against steel cracking/ Swung beak, hammered chest, to break out, breaking’. The bird is a creature whose very ‘antic’ being defies any kind of human laws or strictures. Its ways are not the ways of the old man and it will not be changed by its lesson because it ‘loves only blue’. Cottier gives a powerful sense of the futility of the punishment the old man wreaks upon the bird, ‘wasting [its] day’ with his pointless cruelty and wrong thinking. Eventually the bower bird is released as ‘the blueness pulled her up and out’, and the poem ends with a perhaps unnecessary reflection and a final rhetorical question on what if anything has been learned by the cruel lesson. Like the eponymous piece, this poem too seems to be imbued with a wider awareness of the many-faceted cruelties and injustices which stem from narrow, fixed judgements.

Cottier explores this idea further in ‘Rock’, a powerful dramatic monologue preoccupied with the bloody prints of religious intolerance and injustice. The speaker, a Christ figure, tells in the opening line, ‘I didn’t want this, not at all’. Instead of his sacrifice giving way to ‘birthing brightness’, the rock that is rolled from the tomb after the third day has not led to a change of heart and has not freed humanity from its fundamental wrong thinking: ‘to understand, or at least/ not to irrevocably judge’. Instead, like the old man in ‘Teaching a lesson’, Christ’s sacrifice has been a complete waste of time; no lesson has been learned because humanity’s thoughts are like ‘drowning pebbles/ sinking in a hard skull cave’. That the rock -like obduracy of humanity is resistant to any kind of resurrection or change of heart is explored throughout this poem, especially in the carefully crafted linked diction of ‘sarcophagus’, ‘stones’, ‘mortar and pestle’, ‘boulder’, ‘skull’, and the place of skulls itself, Golgotha, the place of crucifixion. This strong poem ends in the despair of the line ‘The third day never comes’.

A change of tone and subject is offered in the collection’s next poem, ‘Forlorn’. It explores with wry good humour and wit the ‘garbage jungle’ of our throw- away society with its ‘dark shameful stains’ of ‘sodden brown tea tampon/ like a guilty dog’s tail’. The careful placement of this light- hearted poem which explores our environmental vandalism after the bleak despair of the previous one is typical of how Cottier injects a change of tone and mood to offset the darker serious poems in the collection. The Glass Violin is arranged in this way with the regular relief of light and shade and seems to work reasonably well although, at times, the switch can seem too abrupt. A space for reflection rather than a complete change of pace and mood would inject some needed stillness into the busyness of the volume.

Cottier also fastens on inflated personalities to expose their foibles and to ferret out their ridiculous self importance and inflated egos. ‘The salesman’ is a beautifully realised character annihilation of a car salesman. The narrative focuses on the female speaker’s wish to purchase a V8 car instead of the four cylinder model car the salesman pressures her to buy. The poem details the salesman’s fixed and stereotypical views of the kind of car he thinks a woman should have, ‘four cylinder models/ dozing in the corner like anaemic mice’. The woman, however, is determined to have the V8 and win out against the oily presumptions of the salesman. In this humorous tussle of wills, the salesman is no match for the woman’s desire to subvert the ‘lubrication of his tongue’. The poem ends with the victorious woman driving the ‘loud-mouthed Pegasus’ towards the ‘dreaming endless hills’.

The final poem ‘Progress’ is autobiographical and in it the author gives a poetic resume of her career to date, but a careful and attentive reader of The Glass Violin will have already discovered that P. S. Cottier is a poet who aims to use poetry to change the world in a way that her previous work as a lawyer did not permit. This collection, does ‘unmask justice’ and sees into the many ‘dark corners’ of our contemporary existence, but it also presents beauty and light and offers much to smile over that is quirky and original and fun.

Moya Pacey is a Canberra poet who was shortlisted for the David Campbell Poetry Prize in 2008.

View all posts by Moya Pacey on Cordite →