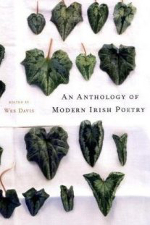 The words you gathered then
Will live on in an alien tongue.
(Máirtin Ó Direáin, ‘Homage to John Millington Synge’)

Reviewing a publication like Wes Davis’s An Anthology of Modern Irish Poetry feels like an act of hubris, a rash attempt to sum up an entire culture in a few pages. This problem stems, in part, from the collection’s strength: comprehensiveness. Davis gathers together fifty-three Irish poets of the post-World War II era, apportioning significant space for each in this almost one thousand-page book. Additionally, Davis introduces each poet with a brief biography and description of their relation to the traditions of Irish poetry. Many of the poets may be unknown to those not deeply engaged in modern Irish verse, but there are also a significant number of twentieth-century poetry’s canonical stalwarts – C. Day Lewis, Patrick Kavanagh, Louis MacNeice, Samuel Beckett, Seamus Heaney and Paul Muldoon – and by allotting each writer up to twenty poems, Davis ensures that poets can here be enjoyed at greater leisure than usually afforded by anthologies. For readers hoping to learn the lay of the poetic landscape, this collection provides a valuable resource. But a great anthology provides more than a resource to be mined: it renders, condenses, concentrates its materials, smelting distinct ores into a single alloy. Whether An Anthology of Modern Irish Poetry achieves this is far from certain.

Irish identity and Irish nationalism are, naturally, central concerns of Davis’s introduction. His selection of poets explores not just the more obvious sectarian tensions of Ireland, but also contests Ireland’s self-conception. Such redefinition happens, as Davis points out, in the ‘shadows of Yeats and Joyce’, who it could be argued provide compass points by which all alternative positions are mapped out. Poets take sides: some, like Muldoon, embrace the demotic energy of Joyce’s mongrel, street-smart Irish-English; others, like Padraic Colum, seemingly aspire to a Yeatsian, purified Irish-English dialect of Celtic aristocracy. Surprisingly, few poets engage directly with Irish mythology – perhaps put off by the excesses of the Celtic Revival. But many, like Desmond O’Grady, seem captivated by Joyce’s vision of a Hellenic Ireland, masked but not obliterated by Roman and British influence of centuries of colonisation. There are plenty of cottages and peasants and famines, but these are put to drastically different ends: from celebrations of a disappearing peasant culture to dogged critiques of De Valera-inspired social conservatism. Though the poetry selected could (en masse) justly be accused of nostalgia, there are also those poets who kick against the pricks of modernity, rejecting the backward looking glances of Gaelic nostalgia. Poets like Denis O’Driscoll refuse the grand narratives of nationalism and culture, preferring to focus on the mundane or chanced-upon: a reflection on the life of a grocer, the tulip craze, staying up late. Of course, while all of these poets may invite pigeon-holing, they also resist it. These positions are not campaign promises; they are arguments conducted as much privately, within the psyche of the individual poets concerned, as publicly with their audience.

What is striking, perhaps particularly to Australian readers, is that so many of these poets seem engaged in a common project: a national poetry. No doubt, this reflects the choices made in assembling a nationally-themed anthology, but it is, I think, more than that. There are notable exceptions: Day Lewis, Beckett and MacNeice are famous examples of those who seemed to stand aside from this collective project. But others, like Vona Groarke, Nuala Ní Dhomhnaill, Paul Durcan and Michael Hartnett, all seem invested in a national literature. Places are namechecked – Baggot Street, Drogheda, Caherlistrane – as though they could be re-owned, decolonised by recitation; the wounds of Irish history are dressed and addressed in many poems – The Boundary Commission, hunger striker Bobby Sands, Sinn Féin founder Arthur Griffith – as though trying salve these traumas; the idioms and idiolects of Irish-English are harvested, stored in honey-combed patterns of verse.

More impressionistically, readers might note the common core within the verse: a continual dialogue of the vernacular with something more universal, a slight muddying of the clear Yeatsian line with a newly-embraced rural or working-class grit. For the most part, this is a poetry of plain-speaking; nothing too too showy, it gives emphasis to the accented English of Ireland. It’s a poetry whose English incarnation would be a cross of Larkin and Hughes; its Irish apotheosis is Seamus Heaney.

An Anthology of Modern Irish Poetry presents only poetry in English, though it includes a number of Irish-language poets in translation. The decision is important. Not only have many of Ireland’s most important poets written in Irish, but Irish poets writing in English seem also to mourn the Irish language’s death to them. Perhaps this is endemic to Irish literature; isn’t the pre-conscious linguistic confusion of Joyce’s Finnegan’s Wake, where languages seethe and swarm into each other, just an attempt to return to the womb of a mother tongue? Why did Beckett use French as a prophylactic language of composition? Is it not an attempt to protect himself from the domineering of paternalistic English in the absence of a mother tongue? The solution of the poets collected here might be seen as more practical and less grandiose. They have grafted and spliced the surviving fragments of Irish onto their root language, English. Such ideas are complicated in the case of poets claiming a Unionist heritage. But those whose heritage is Scottish have themselves lost a language; and the Anglo-Irish themselves know that their vowels and consonants are not, without effort, acceptable in the Home Counties. For those who do not reinvent themselves as honorary Englishmen, like Oscar Wilde or even Day Lewis, the loss of a mother tongue must always feel grievous.

The translated Irish language poetry is a highlight of the collection, perhaps because, for many readers at least, the other great poets have been previously encountered. Nuala Ní Dhomhnaill’s ‘A Recovered Memory of Water’ captures our inability to say what language is:

Pages: 1 2
This entry was posted in BOOK REVIEWS and tagged Aaron Mannion, Wes Davis. Bookmark the permalink.
Aaron Mannion lives in Melbourne and is a writer, editor and academic. His research interests include nineteenth-century and contemporary literature, ordinary language criticism, intimacy and exile. His creative work has been published in Wet Ink, The Sleepers Almanac and elsewhere.