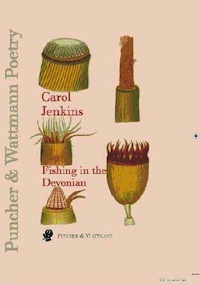 Fishing in the Devonian by Carol Jenkins
Puncher & Wattmann, 2008

Carol Jenkins's first collection of poetry, Fishing in the Devonian, has been identified as a body of great 'scientific' poems. Michael Sharkey's quote on the publication's back cover and Judith Beveridge's pick of the best books of 2008 in Australian Book Review both single out Jenkins's work for its strong use of science. Indeed, Jenkins's own blog refers to her work as 'science-based', and the collection was launched by Radio National's most prominent science reporter, Robyn Williams.

As an avid reader of science writing and a lover of Australian poetry, these recommendations and the cleverly anachronistic title of the collection were what initially drew me to her work. Happily, I think it can be said with confidence that Jenkins's categorisation as a science poet, while partially accurate, sells her writing considerably short – she is so much more than that. Jenkins's Fishing in the Devonian also contains striking instances of humour, pain and humanity, held together by scrupulous observation of the natural and social worlds around her.

When she does work in the domain of science – be it chemistry (where her professional background lies), astronomy, geology or biology – Jenkins leaves us in no doubt as to her knowledge of, and passion for, the subject. We are in very capable hands when she invites us back through deep time to the Devonian period of the titular poem. Here, at one of the most important stages in the history of life, the fish Tiktaalik roseae is 'having second/ thoughts about the water'. Without needing to check, we know she has her facts straight. She doesn't let us get away with conjuring up our own scientifically inaccurate details:

The mother narrator of 'Jigsaw' assumes the role of scientific advisor to her young son, anxiously curious about the far-flung fate of Earth when our nearest star reaches its ultimate decline. In response to his question about 'bits of the Sun' hitting Earth in an explosion, she tells him, 'I think the lack of gravity/ will have run its course before the Sun/ lumps hit the earth'.

Many more of the book's 51 poems showcase Jenkins's fascination with various arenas of science. 'Toy People' discusses the much publicised discovery of the hobbit-like species of human on an Indonesian island. The poem playfully questions the patronisingly superior nature of Homo sapiens. Another work, 'Pollen', describes the subject of its title as 'Down-scale gene lifeboat, wind shifted silt,/ nose teaser, sneeze bearer, deciduous dust', evoking in the reader's mind a more-than-everyday consideration of this prosaic stuff.

My concern with the labelling of Carol Jenkins's verse as science writing is that, while undeniably apt on one level, it excludes so much of what she does in Fishing in the Devonian. For readers interested in science, the marketing works, but it is disappointing to think that those lovers of well-written poetry who might tend to shy away from science writing are missing out on the exciting imagery, humour and warmth of Jenkins's work. For those averse to science writing, a great degree of the collection does not deal with scientific themes at all.

One of the many poems not fitting the scientific label is the brief 'Over Winter', in which Jenkins eloquently describes a glove:

Another piece unrelated to science is the arresting 'After living together for a year'. Here, Jenkins delves into the dynamics of a relationship. The female narrator has taught her male partner to knit, something he does with a masculine, but artless efficiency. The images of 'wool as metal work' and his handiwork mirroring 'the tensile density/ of his abdomen' are among the strongest and most effective in the book.

Jenkins also proves herself to be adept at employing humour. 'Flat-Pack' asks us to imagine Keats as, of all things, an IKEA employee; and the nostalgic, but silly events of 'Chaired' made me laugh out loud. The descriptions of a child trapped in the slats of a kitchen chair, and the fact that her family refuses to rescue her, are both ridiculous and endearing: 'I was caught – kneeling on the kitchen floor/ behind the chair, with my head sticking/ through the slats just above the grainy polish of the seats.'

Some of the most interesting poems in Fishing in the Devonian are the ones in which she combines her scientific knowledge with the aforementioned warmth, social observation and wry humour. The technique works best in 'PET Facts', a poem in which the scanning technology of Positron Emission Tomatography is used to isolate 'the Sadness Centre' in the human brain. This is the location 'where tiny families sit/ down for afternoon tea when the baby/ dies at the hospital', and where there's 'an empty bookshelf, the first Christmas card/ you ever made for Dear Mummy/ and a handkerchief'. The poem ends with doctors being able to hang a “closed” sign on the door to this part of the brain, telling the bitter thoughts 'that no-one's home and don't come back either'.

Carol Jenkins's science (when present) is not a cold science – it is an insightful and fascinating one. Using her formidable poetry, she may well achieve the goal towards which many writers of popular science prose (such as Richard Dawkins, whose work she references in 'Cloud Me') ultimately aim: that of inspiring in the reader a sense of awe, wonder and understanding of the natural world. My hope is that Carol Jenkins's Fishing in the Devonian finds its way into the hands of a wide and varied range of readers who appreciate fine poetry, not just those for whom science is an established area of interest.

This entry was posted in BOOK REVIEWS and tagged Benjamin Dodds, Carol Jenkins. Bookmark the permalink.

Benjamin Dodds is a Sydney-based poet who grew up in the NSW Riverina. His debut collection Regulator was published by Puncher & Wattmann Poetry in 2014. His poetry and reviews have appeared in Best Australian Poems, Southerly, Meanjin, Cordite and on Radio National. He co-judged the 2018 Quantum Words Science Poetry Competition. His second collection Airplane Baby Banana Blanket is forthcoming from Recent Work Press in 2020.

View all posts by Benjamin Dodds on Cordite →