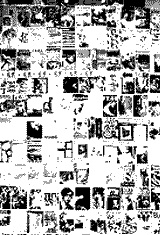 How can one ignore names such as Inter Urban Service, RIP, Anti-Gravity or Lose Ugly Flab By Eating Less? They come inside matchboxes, envelopes, or gently packed in wrapping paper. Some you can't even view without 3D glasses. Some are only one page long. Whatever their shape or size, zines are a direct approach to self-expression – away from glossy, elitist print media.

Zine culture seems to establish itself very fast because 'zines are quickly produced, cheap to print and anyone with a little creative spirit can make them. The Artzine exhibition ran at the Spencer St Art Gallery in August '99 and displayed more than 100 self-generated publications. Phil Edwards, a lecturer at RMIT, organised the extravaganza, and took me on a tour.

“The exhibition has egalitarian values – I invited anybody to participate, from established artists to amateurs and school children. Zine culture is less pretentious and has a political code to it. I have always wanted to set up a political book store with obscure publications displayed on tables,” he said.

'They are their [creators'] alter-egos, pages of their diaries, because they have the freedom to be different,' Phil continues while showing me a 'zine with Ray Martin's smiling face on its cover, titled No Recall to Reality.

Other zines are simply graphic images and photocopied collages. The boundaries of content were stretched to include music recordings. Re-activate zine was all about 'visualisation of sound', said creator Garry Skinner.

'I wanted to show the pumping sounds that I recorded in an old abandoned building. It is my first zine and it sold well.

'zines don't have a specific agenda. They can be about anything.'

Phil handed me a zine which contained photocopies of parking infringements and court documents. Another I picked up looked more like an encyclopedia of famous quotations paralleled by very funny images. Kate Gotching's zine was bound by coloured clips and contained illustrations showing the breaking journeys of rulers, cups, pencils and pens. Like a moving picture-if one flicked through pages fast enough.

'It's good to keep the prices down,' Phil explained. 'It means faster circulation and more exposure. The ones I call 'Feral Popular Culture' sold the best.'

Glue, Phil's own baby zine, also sold well. Different artists did each issue, in a hybrid between collective consciousness and sketchbooks, with artists remaining anonymous. Glue was the springboard of the entire exhibition.

'People enjoyed doing so much. Once people have a specific knowledge and access to materials, arts can become elitist and exclusive, but it doesn't have to be. That's why 'zine culture is expanding.

'In this exhibition, we have works from New Zealand, Finland and Holland, but more than half are Australian. I have work here from a 50-year-old builder whose drawings are from when he was 18. I love that. Seventy percent of the participants I've never met. There are more than 200 artists involved.'

It seems that zine culture is here to stay and since zines have such a short shelf-life, grab them whichever way you can: at obscure galleries, paraphernalia shops or send a stamped self-addressed envelope to the appropriate PO box.

zines from the Artzine exhibition can be purchased in Victoria at Sasquatch shop in Port Philip Arcade off Flinders Street, at Polyester Book Shop, Brunswick street Fitzroy or order it through Field Study, c/o David Dellafiora, PO Box 1838, Geelong, Vic 3220.

This entry was posted in FEATURES and tagged journals, zines. Bookmark the permalink.

Gaby Bila-Günther, aka Lady Gaby is a Berlin-based writer & spoken word performer who has been labelled 'the Peaches of Poetry' in Berlin, 'oddly poetic' and 'flamboyant and upbeat' by The Age newspaper in Melbourne and labelled 'provocative' by The Pill in Prague; blushing she asks - why? A regular performance poet and writer on Berlin's scene, Lady Gaby hosts multimedia performance events as well as interviews, international and local performance & music 'scene shakers' such as: Peaches, Cobra Killer, Angie Reed etc. she hosts berlin's favourite spokenword show since five years, FUEL where local and international poets, slammers and quirky musicians have graced the stage. In 2004 she performed at the first Berlin Slam Revue in Kalkscheune, Mitte. In August & December 2009, she performed at Gender Festival at Wir Gallery and made it into finals of the European Slam Championships in Berlin, Oct 2009. Her stuff live in Herbst Radio 99.1 in February 2010. In August 2009 she completed a residency In Czeck Republic for the project, Undercovered after touring Italy and Slovenia in April 2009. Her most recent work can be found published in Berlin's new English Literature Journal, SAND. Lady Gaby performed at the launch of SAND at ICI, Berlin in May 2010 and received standing ovation. Her poetry & writing accompanied by DJ Zimmer was presented & performed at Transmediale 09 Festival @ Haus der Kulturen der WELT, Berlin in January 2009 as part of an online collaboration: TRANSIT LOUNGE, 'Moving along without going anywhere.

View all posts by Gaby Bila-Günther on Cordite →