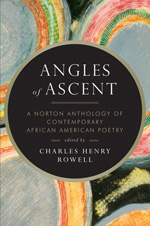 Charles Henry Rowell’s expansive compilation of contemporary poetry beautifully archives some of the most lyric and provocative African-American voices of the last fifty years. Given the dearth of black poets celebrated within the American literary canon, Angles of Ascent is an essential text that pilots readers through the deep and yawning poetic traditions practiced by African-Americans. The anthology provides a beneficial overview for novice readers, including the greats like Gwendolyn Brooks, Audre Lorde, Robert Hayden, Toi Derricotte, Rita Dova. It also features those making a more recent splash like Poet Laureate Natasha Tretheway, 2008 inaugural poet Elizabeth Alexander, and newly awarded Pulitzer Prize winner Tracie K. Smith. Specialists, however, might find Rowell’s anthology frustrating given that the early work of certain authors – Lucille Clifton, Terrance Hayes – is overrepresented, while the most provocative work of poets like June Jordan and Jayne Cortez is excluded. Nikki Finney is nowhere to be found. Most egregiously, the seminal voices of Langston Hughes and Sterling Brown are missing altogether. Regardless of Rowell’s preference for Hayden’s lyric, the impact and importance of Hughes to the history of African-American verse is undeniable. No anthology of African-American poetry is complete without him. Despite this error, the boon of Angles of Ascent is that it provides a much-needed history, chronicling the diversity of African-American voices and narratives. It puts the works of A. Van Jordan and Kendra Hamilton in conversation with that of Yusef Komunyakaa; Carl Phillips with Audre Lorde; Thomas Sayers Ellis with Michael S. Harper and Amiri Baraka; so that the careful reader might find aesthetic threads and allegiances between them.

Rowell arranges the work into two sections which progress chronologically: ‘Precursors’ and ‘Heirs’. ‘Precursors’ contains three divisions: ‘Modernists’, ‘Black Arts Movement’ and ‘Outside the Black Arts Movement’. ‘Heirs’ is also divided into three additional subsections: ‘First Wave’, ‘Second Wave’ and ‘Third Wave’. Within each the poets are arranged in alphabetical order, making the anthology fairly searchable. One of the best choices Rowell made was to include a summary of each author’s personal poetics instead of a bio. These summaries enrich the subsequent poems by explaining the poet’s goals as well as their aesthetic influences.

Rowell focuses the work on contemporary voices, and as a result the largest section of the book is ‘Heirs’. But if the divisions seem not to mark any real aesthetic breaks within the tradition, that is because they do not. I am not sure what fissure divides Sherley Anne Williams, Etheridge Knight or Audre Lorde from A.B. Spellman and Mari Evans. The following excerpt from ‘I am a Cowboy in the Boat of Ra’ (134) by Ishmael Reed is in spirit and kind very similar to Nikki Giovanni’s ‘Ego Tripping’ (47), cultivating a lexicon of high and low, merging the every-day with Pan-African mythos, yet Giovanni is considered a Black Arts poet while Reed escapes that designation.

As Amiri Baraka points out in his review of Angles of Ascent, there are few if any artistic threads which unite the poets within one section and differentiate them from those within another. This is in large part due to the anthology’s organisation. Being linked by a common racial background during a common time period does not imply a common aesthetic. Nowhere does Rowell describe what in fact divides one set of poets from another, other than the numerous instances he attempts to quarantine the Black Arts Movement as ‘prescriptive’, ‘ limited’ or too black to pass for literary.

Within the first sentence of the preface, Rowell makes his allegiances very clear. He demarcates the Black Arts Movement as ‘narrow’, ‘limited’, angsty, political and non-rigorous in comparison to the ‘literary’ and ‘lyric’ verse of poets like Komunyakaa and Derricotte. Rowell correlates contemporary black poets’ freedom of artistry with their choice to relinquish signifiers that make their work identifiably black: ‘Contemporary African-American poets use what they know, imagine, or experience to raise questions that plague all humanity – and who they are frames what they write. Some of them seldom, if ever, use facets from what some readers might be inclined to call ‘black life in America’…’ (xlii).

This statement puzzles me given the content of the poems he includes: the black voice in Terrance Hayes’ ‘What I am’ (342) as seen in the excerpt below or the unquestionably black male experience in John Murillo’s ‘Enter the Dragon’ (497) and ‘Practicing Fade-Aways’ (499), all of Ronaldo Wilson (547-555) or Patricia Smith’s ‘Don’t Drink the Water’ (398). These poets employ a set of black particulars: vernacular speech, pop-culture icon Bruce Leroy and Fred Sanford, popular fiction How Stella Got Her Groove Back to illustrate universals.

In the words of Lucille Clifton, they are doing what a poet does, ‘trying to keep alive the whole story…’ (80). These authors call upon certain cultural fetishes in order to reference ‘black life’ as it is necessary in the retelling and preservation of this American history.

Alysia Nicole Harris is a PhD candidate in Linguistics at Yale University. She is also pursuing her MFA in poetry at New York University. Harris is a member of the internationally known performance poetry collective The Strivers Row. She hails from Alexandria, Virginia and likes all things slow and southern. Harris currently lives in Brooklyn, NY and New Haven, CT.

View all posts by Alysia Nicole Harris on Cordite →