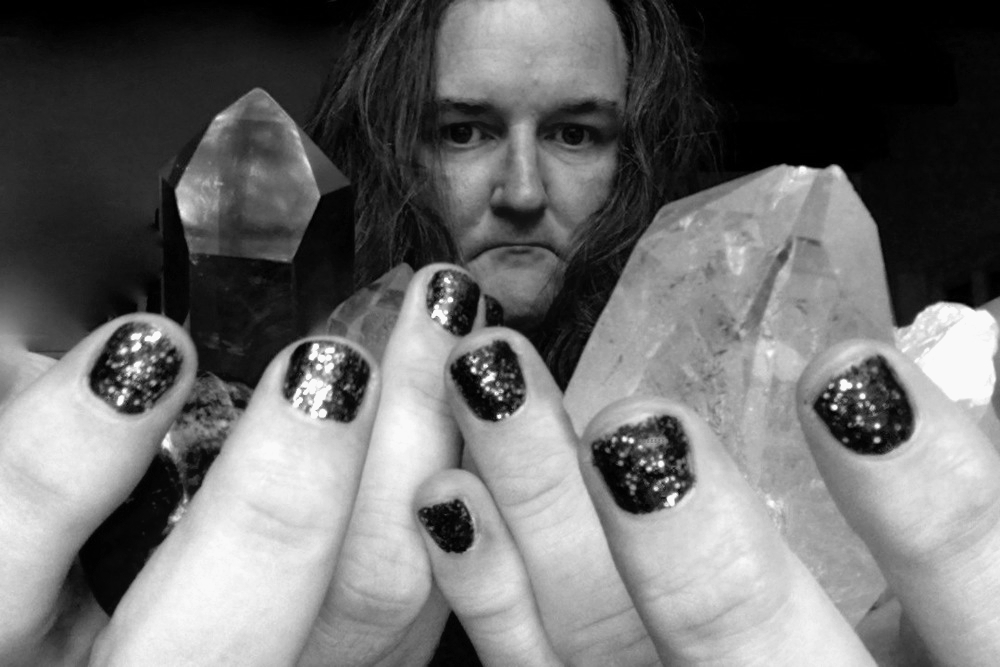 CAConrad is the author of 9 books. Their most recent book JUPITER ALIGNMENT: (Soma)tic Poetry Rituals is forthcoming this year through Ignota Books. The rituals are explorations of ‘extreme presence’, in which they invite us to locate, access and utilise our own expansive and mysterious potential. CAConrad teaches across Columbia University in New York City and Sandberg Art Institute in Amsterdam. They have recently published a powerful new essay titled ‘SIN BUG: AIDS, Poetry, and Queer Resilience in Philadelphia’ in Poetry Foundation’s Harriet blog, a publication dedicated to exploring poetry in its many facets both past and present. As CAConrad writes in the opening of their poem ‘Lonely Deep Affection’: ‘years of practice for a soft / landing in the slaughter / we looked far off to / a flag sewn into flesh’. This exchange also touches upon the value of flesh and whose flesh is valued more over others.

daniel ward: In speaking to the themes of your new essay ‘SIN BUG: AIDS, Poetry & Queer Resilience’, and in consideration of the current outbreak of COVID-19, what parallels might we be able to pull between these two global epidemics? How do you think your own experiences throughout the 80s and 90s inform your current experience witnessing widespread health concerns and distress?

CA: Thank you so much for this interview; I appreciate it. Is it possible you are seeing what is happening here in America? US corporate medical supply companies are making governors of states compete by outbidding one another! As a result, doctors and nurses are risking their lives because they cannot access protective gear. It taxes the soul, witnessing the grotesque teeth of this heartless empire! After this is over, quite honestly, daniel, if someone wants to champion capitalism, I will shrug at them because I cannot imagine a more explicit illustration of its violent deficiencies then what we are currently living in.

There are so many moments these last week’s where I see correlations between this crisis and the early years of AIDS. Those who see money in every opportunity, for instance. AZT was a failed cancer drug that was used, and I tried so hard to keep my friends off of it. Everyone I knew who took it died, and Michio Kushi warned us at one of his macrobiotic lectures that the drug was killing people, but too much money was being made to halt production. Today reporters showed us how in Las Vegas homeless people are being made to sleep in specially marked sections of parking lots while there are thousands of empty hotels and casinos!

Poetry helped me subsist when I was a kid watching my friends die of AIDS, and poetry is still with me all these years later. Seven years ago, I did a (Soma)tic Poetry Ritual to cure my depression after my boyfriend Earth was brutally tortured, raped, and murdered in Tennessee. The ritual made its impact on me by using a small crystal he gave me the last time I saw him, which he had kept it in his pocket for over a year and a half, turning it into a library of his breath, his dreams, and movements. Twenty-seven poems resulted from the ritual, and I am nothing but grateful that poetry afforded me this opportunity to heal what seemed a permanent and debilitating wound.

The strength of poetry gave me my life back again; however, as soon as I felt better, the many deaths of friends and lovers who died of AIDS flooded back to me. Every neighbourhood in Philadelphia had a door, sometimes several doors of people I knew who had died when we were just kids. I decided to write this ‘SIN BUG’ essay, but it took me seven years because the process was too overwhelming to write it until recently.

The essay was an exorcism, leaving me lighter. It is a cliché to say this, but it is a fact, it was a release, a relaxed psychic clench. A vehicle for writing it was listening to Alexandra Pajak’s album, Sounds of HIV. He assigned pitch and tone to DNA study results by the US National Institute of Health. His translation of the virus is unexpectedly calming. I climbed inside the music and was able to keep focused through bursts of crying. When you are a teenager and then in your early 20s and that many people are dying around you, and nearly everyone else is acting like it is not happening, that kind of PTSD takes years to be able to cope. To contact my deceased friends while writing the essay, I created a (Soma)tic poetry ritual I call The Wizard of Oz Portal. This film is something all of my dead friends, and I saw, and knew quite well, so it became the perfect place to visit and invoke their names. Here is what I did: I have been thinking a lot about hypogea in ancient Greece. Hypogeum was circular burial chambers, and pregnant women would visit the remains of their dead ancestors to invite them to inhabit the bodies of their unborn babies. I hope I was a pregnant woman who performed this ritual in a past life. It sounds terrifying at first, seeing the bones of the dead. Still, it is exciting thinking of such an experience coursing through my electrical circuitry, my blood pumping into the heart of my unborn child and ancestor simultaneously.
Do you remember the scene in the film where the wicked witch puts Dorothy into an opium-induced trance in the poppy field? It is an essential part of the story because after Dorothy is pulled out of the trance by the good witch Glenda, she can finally see the solutions for the way out of fear and suffering. But when she is asleep in the poppies, this is where I freeze the frame, then sit across the room with binoculars, studying Dorothy caught inside her morphine-hypnosis while I quietly invoked the names of dead lovers and friends.

I had a dream that I walked past a church and singing poured onto the street. When I walked inside, everyone I knew who had died of AIDS was there. They were all healthy and hugged me, happy to see me, and I was so glad to see them. There has never been a dream as good as that one for me. Even my next best was only half as overwhelming a vision, laughing, and talking with these friends. If I could get pregnant, I would want to be in a hypogeum with them and invite them to revisit the physicality of Earth through the life of my baby. Without hesitation, I would do it and write poems with our child, a true collaboration. I did enjoy revisiting everyone through The Wizard of Oz Portal. The ritual assisted me in re-examining the parts of my life that these vanished souls made more beautiful.

Pages: 1 2 3 4
This entry was posted in INTERVIEWS and tagged CAConrad, daniel ward. Bookmark the permalink.
daniel ward is a writer and musician. They co-curate an experimental sound and poetry podcast. They are currently finalising their first book of poems.


More by daniel ward on Cordite Poetry Review →
CAConrad is the author of nine books of poetry and essays. While Standing in Line for Death (Wave Books), received the 2018 Lambda Award. A recipient of a Pew Fellowship in the Arts, they also received The Believer Magazine Book Award and The Gil Ott Book Award. They teach regularly at Sandberg Art Institute in Amsterdam, and their books, essays, films, interviews, rituals and other publications can be found online.