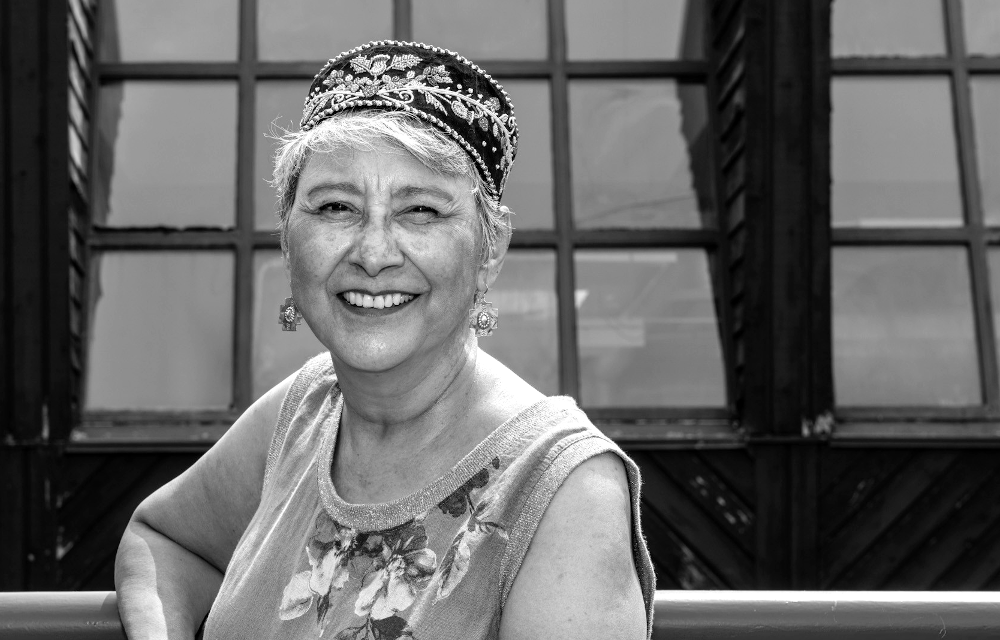 Marilyn Dumont is an accomplished writer and poet of Métis ancestry whose award-winning collections include A Really Good Brown Girl (1996) which received the 1997 Gerald Lampert Memorial Award from the Canadian League of Poets; green girl dreams Mountains (2001); that tongued belonging (2007) which won the McNally Robinson Aboriginal Book of the Year and Aboriginal Poetry Book of the Year; and The Pemmican Eaters (2015) which received the 2016 Writers’ Guild of Alberta’s Stephan G. Stephansson Award, which she had previously won with green girl dreams Mountains. Dumont earned her BA from the University of Alberta, where she is currently faculty, and her MFA from the University of British Columbia.

Andréa Ledding: What does it mean to you to be a Métis poet, and what part does your identity, and the history of the Métis people play into that role?

This is quite different to state than to say: ‘I am a Métis poet’. That seems to be a lot of hubris, as if there are a long line of Métis poets.

The term poet is inherently subversive and says a lot. It may not signal to most that I advocate for Métis people. Some might think I write flowery poetry about the Métis.

AL: And your poetry is not what I would describe as flowery. It is visceral, real, conversational, observational. Much of it tells your own story within the context of your identity, while The Pemmican Eaters explores major historical figures and moments. Additionally, you are one of the ‘first’ poets who was proudly Métis to emerge in print; what was that like? Can you speak more about the inherently subversive act of being a poet, along with the subversion of having survived attempted genocide of your ancestry and identity? And the act of advocating for Métis people through your poetry?

MD: I was excited and anxious about my first publication because I heard through the grapevine that some family members didn’t like what I was writing. I wasn’t able to ask them why because I had heard it second-hand, but that in itself touched a deep anxiety that I ignored and continued to write.

At the time I began reading, few people knew anything about the Métis other than the entrenched perceptions of the Riel Resistance period, and the focus and popular understanding was that I was Indigenous. End of story. There wasn’t a nuanced recognition of me or my identity. I think people found it an exotic novelty: ‘a real, live Métis. I guess they’re not all dead.’

So, the question is more reflective of the popular culture’s understanding of the 2020s than the 1990s when I wrote and toured A Really Good Brown Girl.

I was drawn to poets because I felt like I fit into their ethos of people who speak up about injustices/contradictions/struggles of trying to consciously live a just and generous life. At an early age, I was outspoken and recognised the power behind speaking one’s truth. I learned that what might be true was frequently not articulated. That was an important moment in my development.

This event in my life and reading lead me to poets and this amazing family of ‘outsiders’ who through their writing asked the pointed questions, made the insightful observations, exposed dehumanising attitudes and practices. Upon reading their work and reading about their lives, I began to feel like I had found – my people. And upon also learning that this ‘family of outsiders’, who I felt akin too, struggled to make a living and that this had been the reality throughout the history of poetic expression, further convinced me that what I was doing was worthwhile and important.

I didn’t know at the time of writing that anything I wrote about the Métis would mean anything or resonate with other Métis, my drive was to find a way to cope with the erasure of the Métis, the oppressive Settler Colonial and Patriarchy. I wrote to survive and keep my spirit alive amidst all the White Noise.

Post publication, did I realise that my words spoke to other Indigenous women, Métis women, and settler women.

So, I didn’t set out to be subversive, it has been part of who I am. It was there when I was a child and that drew me to poets.

Pages: 1 2 3
This entry was posted in INTERVIEWS and tagged Andréa Ledding, Marilyn Dumont. Bookmark the permalink.
Andréa Ledding is a poet, editor, photojournalist, playwright and general creative writer based in Saskatoon Saskatchewan, Treaty 6 Territory and Homeland of the Métis.


More by Andréa Ledding on Cordite Poetry Review →
Marilyn Dumont is a Canadian poet and educator of Métis descent. Dumont holds an MFA from the University of British Columbia. Her work is widely anthologised. She is currently an Associate Professor at the University of Alberta in the Faculty of Arts – English & Film Studies Department and teaches creative writing.