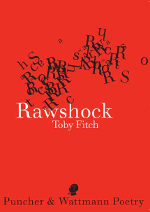 Sydney-based poet Toby Fitch’s first book-length collection, Rawshock, is a lively, artful and conceptually engaging excursion into the underworld of a profound poetic imagination; through the eponymous poem sequence, Fitch offers up the viscera and vital organs of the Orpheus myth for the delectation of contemporary readers. Everyday Static’ and ‘Oscillations’ – the two chapbook-length series that accompany this myth – present a sensuous and affable rendering of Fitch’s key theme; the relationship of the present to the poetry of the past.

Throughout Rawshock, mythic forms take on new life, classical influences articulate contemporary longings and Fitch’s sensuous wit and keen intellect glows through the poetry. Fitch’s approach to the influence of his predecessors – Apollinaire, Mallarmé, Rimbaud – is one of critical play with form and content, style and sound; his work successfully opens up a field of reference that embeds the Australian present in a richly imagined landscape of avant-garde poetics.

His voice is palpable and active, evincing his attentive ear for language games: the flow of phonemes and the shape of words on the page are equally weighted in the semantics of the poetry. ‘Poles’ takes the shape of a switching tail, ‘nightcap’ is presented as a pair of wings across two pages and the ten-poem sequence ‘Rawshock,’ mirrors the shape of Rorschach inkblots which accompany the pieces as illustration.

‘Rawshock’ is the crown jewel of this collection, thundering in the currency of its tongue as it re-presents the perilous path of Orpheus through the underworld. What interests me most about this sequence is its harmonious synthesis of form with content. Much of the poetic imagery draws from, or reflects, the inkblots, resulting in a visual and conceptual symmetry; in the first poem of the sequence, the image could be taken to resemble Orpheus’s ‘high-strung lyre/ in the shape of a moth, or pelvis,’ or the ‘big bad wolf mask,’ or ‘a pair/ of bats twirling through the smoke of a fallen city’ referred to in the poem.

I interpret Fitch’s use of the inkblots in this way to reflect our tendency, when we read myth, to only find meanings that we set out to discover. Though Classical narratives, such as that of Orpheus and Eurydice, are as interpretatively nebulous as one of Rorschach’s images, the mind works to close off meaning to a stable set of signifiers. We can read the myth as a parable not to look back, or as a paean to art’s power to light a torch in the vale of death, or merely as a reminder of the fact of human mortality.

But Fitch has done something different in his telling of the tale: through ‘Rawshock’ he invites us to look back on how we, in the present, read the myths of times past to see ourselves as distorted reflections, the symmetry imperfect as the shape his poems take up on the page.

Fitch’s care and attentiveness for conveying the intensity of emotional experience through poetic imagery glitters in every facet of the sequence, and he demonstrates his particular brilliance for evocative flow of concepts through sound: ‘stop Sisyphus in his tracks, Ixion’s wheel,/ Nyx and the Styx as stoned as onyx’ (‘Rawshock’ IV).

His ability to listen to language, and to play with poetic meanings through sound, is articulated best through ‘Oscillations,’ the final chapbook of the collection. To me, these works represent the triumph of Fitch’s voice – a sensuous and witty one that has been likened by Peter Kenneally to Roger McGough (ABR, September 2012) – and how it plays with the present in the language of the past. ‘I stood on a mountain with my tablet/ downloading the seasons/… And I streamed it to everyone!’ (‘Finding H’)

Rawshock is a promising, pleasurable and supremely engaging offering from a gifted innovator in Australian poetry.

This entry was posted in BOOK REVIEWS and tagged Nicola Themistes, Toby Fitch. Bookmark the permalink.
Nicola Themistes is an allegorist and speculator from Melbourne. Her first novel, , is due for release in June 2012.