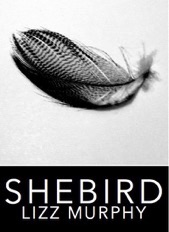 It was these lines from Lizz Murphy’s book of micro poetry, Shebird, which entranced me into selecting it for review. The simple yet effective metaphor, the point at which the mundanity of western life and the horrific reality of child labourers converge, at the crossroads of consumerism: this was what brought me into entering the world of Shebird, the ‘woman or girl who wears the shroud of widows, guards the new grave, tastes gun’. The physical and emotional pain that the Congolese women experience is conveyed expertly in the sensory language that Murphy wields.

When I received the book, I felt like I was holding something fragile and intimate. The paperback format of Shebird gives the volume a textile, delicate feeling, much like the downy feathers of a bird. As the sixth poetry volume in Murphy’s career, the work is highly refined, and finely crafted. Readers of Murphy will appreciate the continuation of the feminine perspective from previous collections such as her anthology Wee Girls, which focused on Irish women’s poetry in Australia. Murphy’s preoccupation with the marginalised voices of women and girls is astutely conveyed in this volume, which translates the pain and violence experienced by women into brief yet profound verses.

The micropoetry format is a continuation of Murphy’s Portraits, inspired by her work with visual art. In the summary of this collection, Murphy describes the micropoem as ‘a flashing wing, a story in a heartbeat, a scrap of the living, a satirical stir’. In Shebirds¸ Murphy continues this slant of ‘a punch in a line’ with many of her poems consisting of only a few lines. The poem I have quoted above, entitled ‘Chocolate Fix’, has been transcribed in its entirety of two epigrammatic lines, yet the implications are expansive. By linking two classes of women through a single image, the coffee bean, Murphy creates a portal into the world of Shebird, the world of the child worker, the girl slave, the global ‘other’ whose voice is unheard.

Murphy demonstrates her ability to concisely portray complex emotions, issues and situations with style and grace. In ‘Dangerous Women’ the stripped back syntax and intensely corporeal language communicate a pain that is at once sharp and compelling.

Murphy’s poetics envelop the reader into the world in such a visceral manner, that it forces the reader to acknowledge the issue at hand. The poetry demands to be read, demands to be heard. Each poem is brief, sometimes only one line, yet it speaks to the heart of an issue that is so often left out of cold statistics.

The colloquial tone of this poem, ‘Who’s Counting’, denies the news report’s cold distance of journalism, and instead gives the rape of this young girl a more human voice. Murphy addresses the issues of violence against women and girls in third world countries in apposite, yet highly imagistic poems. She refuses to let these women and girls be turned into statistics.

A bird motif recurs throughout the volume – in numerous incarnations it is deployed to allegorise the old woman, the child who toils, and the poet-narrator herself. The bird is a fragile, endlessly suffering creature, but also a figure of resilience, one that endures suffering and retains its beauty despite its trials. This culminates in one of the final poems, ‘A Woman is Raped’, in which the poet urges the figure to ‘rise like a shebird / against / the war on women’. As the notation indicates, this poem was inspired by an art and text work depicting the rape of Congolese women. These indices remind the reader that the girls, or shebirds, rendered in this volume are not simply poetic devices, but real human beings that theses horrors are currently being inflicted upon.

This ultimately gives the poetry a gravitas that is needed when handling such a distressing and often unheard of issue. Far from simply being a pleasing assortment of words and lines, though the collection is masterfully crafted, Murphy’s Shebird draws attention to the most vulnerable girls and women in the population, and urges the women’s voices be heard and their stories be told.