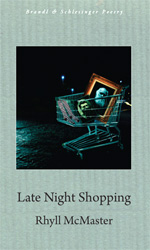 The lyric that opens Rhyll McMaster’s Late Night Shopping begins with the recently deceased and ends in a majestic, albeit materialist, transcendence: ‘When molecules cease their high humming/ dark space appears/ It radiates in waves and disperses in continuous air.’ (‘Shell’)

This sets the tone for a book concerned with the grand themes of life and death, time and age, philosophy and science. The poet Frank O’Hara longed to be a painter; many poets long to be philosophers. The poem ‘Philosophy in a Ghosting Universe’ is, among other things, concerned with the poet’s failure as a philosopher:

The speaker is left with a ‘ticket to not-especially-anywhere’:

This is poetry about not being brilliant, but the reader should not believe it for a second. Philosophy is presented as: ‘a game’ or ‘clever fox / that stops us thinking (‘The image of the box’), the ‘true will of philosophy’ as ‘eternity on manual’ (‘Tombstone Territory’). Any certainty is an act of will:

McMaster’s fascination with philosophy – especially epistemology – is apparent in poem after poem. As in Descartes, nothing is assumed: the poet rebuilds the world from first principles.

But for McMaster, poetry – and the imagination – can, to an extent, fill the void:

In this universe, happiness is brief and ‘fragile as saffron filaments’:

The consolations are not so much this, but prayers and pleas of little hope, wishful thinking, as when, in the suite ‘Five Acts of Faith’, the speaker asks to be deceived:

As in her earlier collection Chemical Bodies, McMaster engages with neuroscience, genetics, chemistry and physics. Like the metaphysicals of the seventeenth century, her learning is not grafted on but an organic part of the poetry, informing the poems rather than the reader. Occasionally, a poem falls short. ‘Amazing Grace’ reads:

This is a neatly turned exercise, with a nice pun on ‘amazing’, but this, the entire poem, seems flippant and slight alongside the most of the work.

Science is a subtext for the suite of ekphrastic poems, ‘Evolutionary History of Edward Kelly in Primary Colors’. These poems are more compact and pacey; they make greater use of alliteration. Rhyme, often used as a final stamp elsewhere, becomes more conspicuous:

The poet’s adjectives are imbued with the vivid colours of Nolan’s paintings. ‘[P]olished wherewithal’, ‘brass religion’, ‘blackest value’, ‘ignominious blue’ and ‘red shout’ are as striking as they are memorable.

Late Night Shopping is McMaster’s best book to date. The poems are accessible enough to attract readers but complex enough to keep them coming back. The poetry seems charged with visceral energy and McMaster’s jagged lines and rhythms ensure that, like the rider of a rodeo bull, her reader remains not just alert but thrillingly alive.

This entry was posted in BOOK REVIEWS and tagged Adian Coleman, Rhyll McMaster. Bookmark the permalink.
Aidan Coleman is a Visiting Research Fellow in the School of Humanities at the University of Adelaide. His two collections of poetry, Avenues & Runways and Asymmetry, have been shortlisted for the New South Wales Premier’s Kenneth Slessor Prize, the Adelaide Festival Awards for Literature and the Western Australian Premier’s Book Awards. He lives in Adelaide and is currently writing a biography of John Forbes with the assistance of the Australia Council.