Innocent Eyes!: Ekphrasis and the Defiant Multiplicity of the Female Gaze 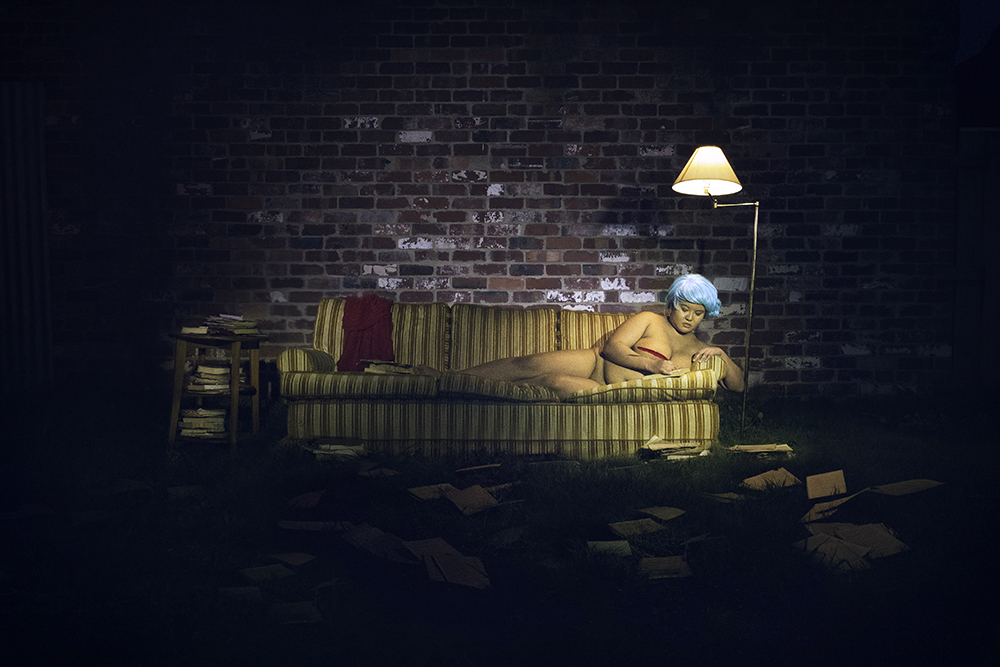 The third image features the same woman this time with short pale blue hair, this time nude, stretched out on a couch beneath a lamp and the evening sky, bent over her journal, open books strewn everywhere.

These are not what one usually sees or seeks when one looks at images of women, whether in classical art, glamour magazines, glossies, or an Instagram gallery. These images are not trying to sell clothes or cosmetics or body modification services. They are visual assays into the experiences of shut-in and open spaces, physically and psychologically speaking. They are physical expressions of the felt sense of where and to whom a woman’s body can belong.

Alison Whittaker wrote three poems that track shifts from and towards markedly different moods. In the first poem ‘i. when to clean a wig’, queerness breathes in the irregular spaces between the words. Pronouns matter here: the narrator is for the most part an ‘I’, who speaks of a ‘husband,’ a ‘he,’ who is in possession of a ‘cunt’. The poem ‘ii’ takes up considerably less surface area on the screen than the first and the last. It moves from a sense of being constrained by the emotional labour demands of a complicated marriage, to learning to become comfortable in the messy uncertainties of one’s dreaming. The third poem ‘iii. a seeing’ takes up space, with large gaps yawning between phrases. Toward the end is the phrase ‘[b]ecome big’, which is how this trio of poems ends up: big, unapologetically so. The imagery in Whittaker’s poems breathes a narrative into otherwise unstoried photographs. The woman in the photographs suddenly has an interior life, love, motivations, character. She is not frozen in time, she is moving through time.

This entry was posted in CHAPBOOKS and tagged Alison Whittaker, Angela Serrano, Ellen van Neerven, Keira Hudson, Saaro Umar. Bookmark the permalink.
Angela Serrano was a 2017 Hot Desk Fellow at the Wheeler Centre. Her first solo poetry chapbook, Else But A Madness Most Discreet is published by Vagabond Press.


More by Angela Serrano on Cordite Poetry Review →
Keira Hudson is a mixed media artist whose practice explores her own corporeality through photography, printmaking, painting, and encaustic wax. She is interested in the human condition, and often investigates this through unsettling fine art nude composites. She finished her Bachelor of Fine Art (Honours) at RMIT University in 2012, and recently completed a Master of Cultural Materials Conservation at the University of Melbourne. Hudson currently works in Melbourne as a life model and part-time textiles conservator.