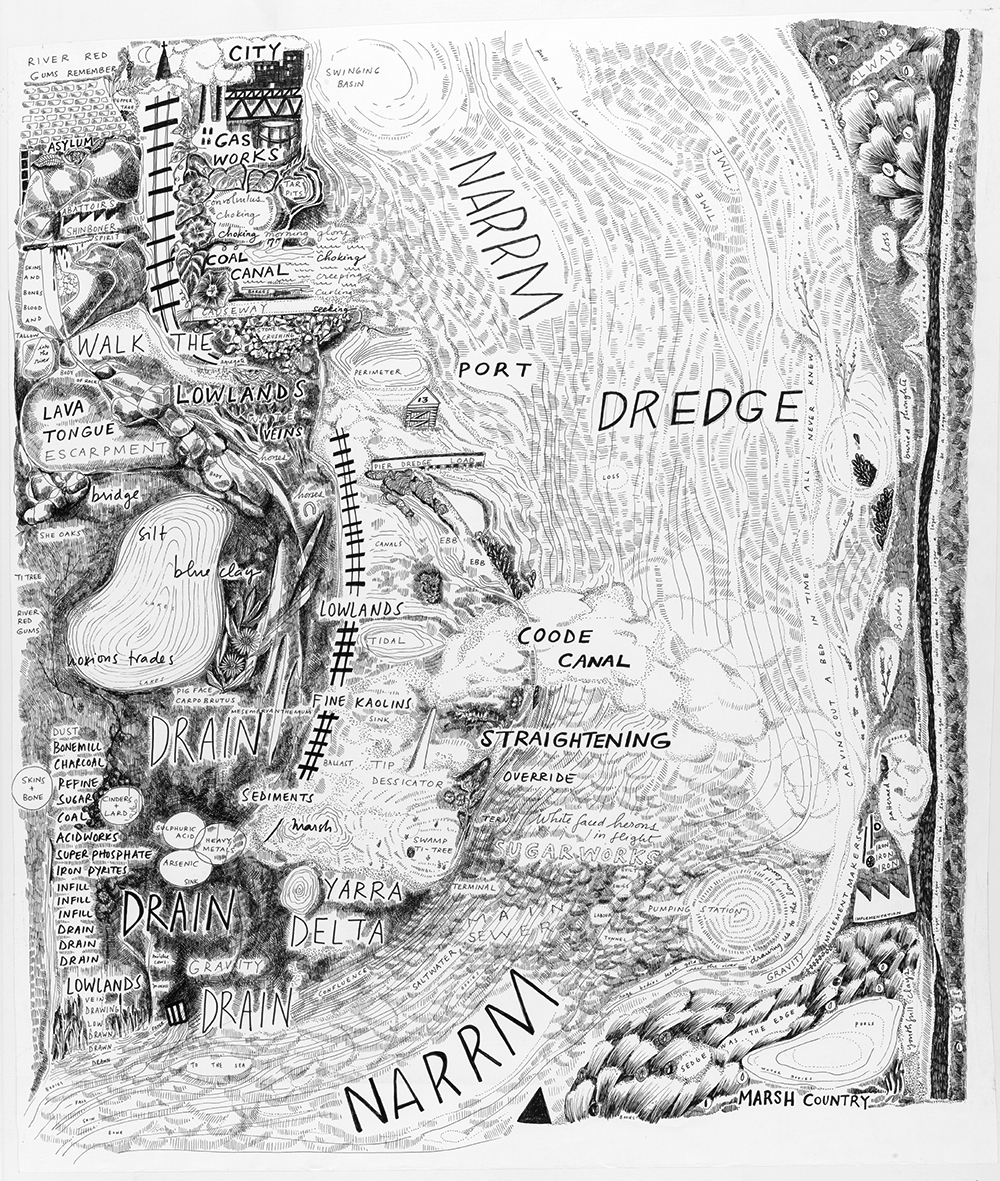 The Orbweavers | Confluence Song Map | ink and watercolour on paper | 2018

We would like to acknowledge the Traditional Owners and custodians of the land and waterways Newer Volcanics is written on, the Wathaurong, Wurundjeri and Boon Wurrung people of the Kulin Nation, and acknowledge their continued culture and connection to land and waters. We pay our respects to Kulin Nation Elders past, present, future and emerging. We acknowledge sovereignty has never been ceded.

We are researching western Melbourne waterways through the period of the late-nineteenth and twentieth centuries, to write and produce a suite of creative works which explore industrial history and environmental change over time, and the lives of people who lived and worked along their banks. This version of the project includes poems and accompanying visuals, with the aim to develop the project further to include songs and maps for later release. Newer Volcanics is the working title of our project and much of the research has been conducted under a State Library of Victoria Creative Fellowship. Our focus is on the Birrarung (Yarra River), Moonee Ponds Creek, former wetland of West Melbourne Swamp, Maribyrnong River, Stony and Kororoit Creeks, and Skeleton Waterholes Creek in Altona.

Note: the links above can be found on each page of this chapbook.

Newer Volcanics is a geological province in south-east Australia. It includes the country south west of Narrm (Melbourne), the unceded sovereign lands of the Wathaurong, Wurundjeri and Boon Wurrung people of the Kulin Nation. A landscape characterised by water courses carved through ancient volcanic plains, silty clays, estuarine sediments, and low lying tidal salt marshes of abundant birdlife, where creeks and rivers meet the sea. Much of the land in the inner-west has been has been paved and overlaid by post-settlement industry and transport infrastructure, but the waterways and sometimes their immediate surrounds persist, a living thread of the past and the present, a continuing flow and force through time.

I (Marita) grew up in the west, loitering by waterways and peripheral industrial sites as a teenager, taking in details but knowing nothing of the deeper histories. My family still live there, which brings Stuart and I regularly across the Maribyrnong River by Dynon Road, or over the West Gate Bridge, to my childhood home in Yarraville, or to Spotswood for work. Our fellowship project became an extension of the river crossings I have been making most of my life.

Psychogeography describes how we currently think about place in relation to our creative work: drifting through urban areas, letting our minds wander over layers of history visible as accretions and remnants; contemplating personal connections and reactions to the landscape. Walking and writing songs in this way has been part of our lives for long time, and inspired much of our second album Loom (2011), a collection of songs about the natural and industrial history of the Merri Creek in East Brunswick. We recently learned there is a term used to describe this activity, and an existing body of work citing psychogeography as a practice.

Dudley Flats: A psychogeography, David Sornig’s 2015 Creative Fellowship project at the State Library, first introduced us to the term (State Library of Victoria). David took us on a walk around the perimeter of what was the West Melbourne Swamp, and we talked about our shared interest in the area, its history, our personal connections to it. This led Stuart and I to searches on Guy Debord and the Situationists, drinking in abundant internet riches on the topic – blogs, critiques, reviews, photo essays. I had read W G Sebald’s Austerlitz (2001) a few years earlier, unaware of Sebald’s place in the psychogeographic canon, and was moved by his layers of place, history and memory described through walking, observation, archival searches, and the inclusion of mysterious – but not entirely unrelated – photographs in the text. Austerlitz provided a sombre and unnamable revelation in form and style, and in retrospect, probably exerted subliminal influence over where my creative instincts were heading.

My day job as a collection manager at a museum has yielded serendipitous waterways inspiration over the years: cataloguing a copy of Sir John Coode’s report on the Port of Melbourne engineering works, oral history interviews with employees of the Spotswood Sewerage Pumping Station, product samples from the Mt Lyell fertiliser works in Yarraville. I file these references away in my mind, making lyric notes on scraps of paper, for later refinement, investigation or contemplation with Stuart. Reference material is in constant accumulation.

Historical archives and maps are important reference points for our work – providing evidence and detail of a place at a moment in time, indicating how the landscape has changed and why. We then use this information to walk through in the present – looking out for remnants and markers. This action forges new sensory memories and emotional associations with a site, which we have found helps our songwriting process. Industrial Heartland (1990) and Worth Its Salt (1991) are reports by archeologist Gary Vines, published through Melbourne’s Living Museum of the West, which provide valuable detail on past industrial activities around western waterways. The State Library of Victoria’s digitised map collection has also been central to our work on Newer Volcanics. Copies of early Melbourne maps are stuck all over our house. We hope to slowly absorb their bird’s eye view topography in contemplative moments.

More recent publications such as Sophie Cunningham’s essay on walking the City of Melbourne boundary with accompanying photographs by Dianna Wells (Boundaries, 2016), and Nick Gadd’s Melbourne Circle: stories from the suburbs (2014-16) are works of local literary psychogeography which echo threads, sites and directions Stuart and I are exploring in our creative works.

Over the last year, Stuart and I have been walking the lava ridges and soft lowlands of western Melbourne any weekend we can. Where waterways have been forced through tunnels and industrial tracts, we jump fences, skirting tracts of colonising onion grass and Morning Glory along railway embankments, under freeways and along wire fencing, to arrive in fennel-covered edgelands of unknown jurisdiction. Psychogeography is like being a kid again, wandering the dangerous, beautiful, abandoned places without clear intention.

When we return home from these walks, we make notes and sketches. I often lay out large sheets of paper; words surface from the lake of memory, and sometimes I create new maps based on our walks.

The following is a meander through some of our excursions which eventually became the poems and drawings included here.

Walking through Melbourne watercourses has brought us to psychogeography, to histories and peoples, to environments and industries, and to creative spaces where we try to acknowledge the weave all these elements make. We want to acknowledge again that we are writing on land where sovereignty was never ceded, and pay attention to stories of pain as well as resistance, histories of peoples, cultures, lands and waters. In creating these works we hope to draw attention to different parts of Melbourne, and particularly to the layers that make all of us here.

This entry was posted in CHAPBOOKS and tagged Marita May Dyson, Stuart Flanagan, The Orbweavers. Bookmark the permalink.
Marita May Dyson, one half of The Orbweavers, is a multidisciplinary artist working in song, performance and visual art. Many of her musical compositions and performances are inspired by history and natural sciences. She has written, produced and released three studio albums, documentary soundtracks for film and television, and have performed across the country at music festivals and cultural institutions. In 2016, The Orbweavers received a State Library of Victoria Creative Fellowship to undertake research and write a suite of songs about Melbourne waterways, which will be presented through The Substation 2018 Commissioning Program.


More by Marita May Dyson on Cordite Poetry Review →
Stuart Flanagan, one half of The Orbweavers, is a multidisciplinary artist working in song, performance and visual art. Many of his musical compositions and performances are inspired by history and natural sciences. He has written, produced and released three studio albums, documentary soundtracks for film and television, and have performed across the country at music festivals and cultural institutions. In 2016, The Orbweavers received a State Library of Victoria Creative Fellowship to undertake research and write a suite of songs about Melbourne waterways, which will be presented through The Substation 2018 Commissioning Program.