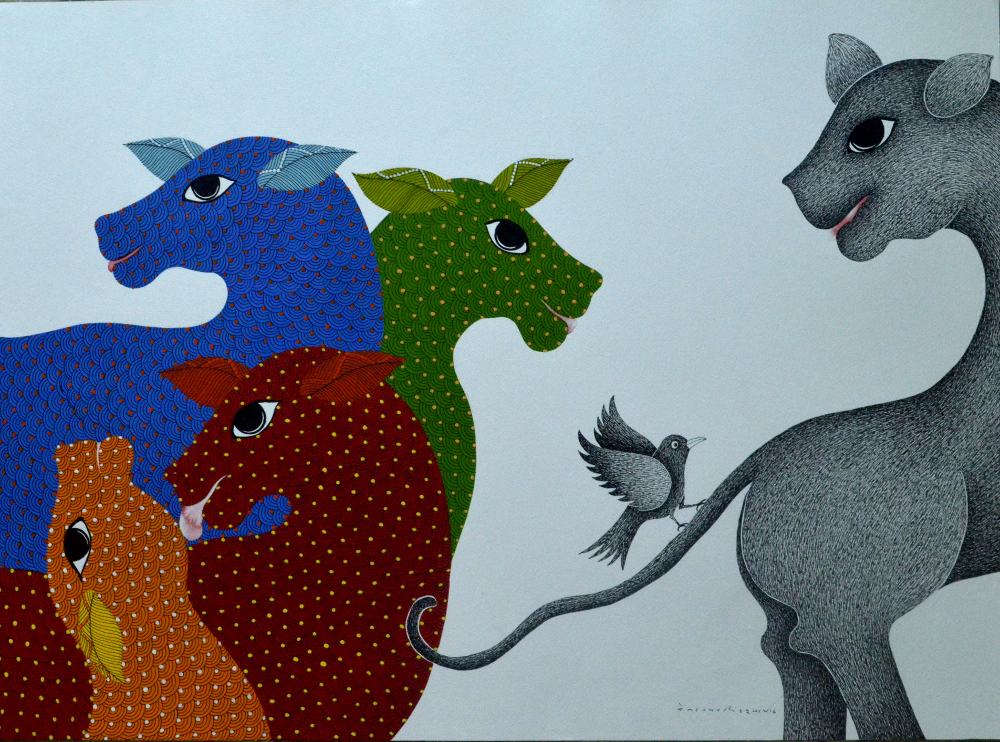 The Gonds are one of the largest indigenous peoples of India and are spread throughout several central states of the country. Gond paintings were initially executed only on the walls of dwellings as an expression of religious beliefs, a record of daily life and local festivals, and to depict the surrounding environment and creatures. Gond artwork is characterised by the use of natural symbols such as trees and animals, with meanings rooted in animistic folktales and the culture of the Gond people.

Venkat Raman Singh Shyam (b.1970) belongs to the tradition of Pardhan Gond art inaugurated by the legendary Jangarh Singh Shyam, his uncle. The Pardhan Gond community is traditionally one of musicians who used to receive patronage from the Gond Rajas. With the impoverishment and weakening of the social order of adivasi (adi=original, vasi=inhabitant) communities, first by colonial apparatuses, and then the administration of independent India, patronage to the Pardhans eroded. With the practical significance of their story-singing gone, they turned to agriculture and labour to sustain themselves. Jangarh’s art arose from this imaginative background and created a new means of expression for members of his community. Jangarh developed the method of pointillistic detailing, which is the transformation of Pardhan music into visual form, known as Jangarh Kalam.

Venkat began drawing with pencil and charcoal from the age of ten. Since charcoal is considered inauspicious among the Gonds, he was discouraged by his community. Through his uncle, Venkat was initiated into the Jangarh Kalam style. After apprenticing with Jangarh in the 1990s, Venkat worked on a range of jobs – including as house painter, screen printer and signboard artist. He was also fortunate to be guided by the pioneering, and one of India’s most influential artists, Jagdish Swaminathan. Since Jangarh’s untimely and tragic death in 2002, Venkat has pursued a full-time career in art despite facing several hurdles. While working as a professional signboard artist, he was exposed to Bollywood film-poster style of painting. In his early years in Bhopal, Venkat developed a visual language comprising vivid colours and broad bands of diagonal shading divided by narrow black-and-white striped bands known as lahr and lahrdaar – ‘waves’ and ‘choppy waves’. Venkat also uses acrylic colours for his paintings.

Venkat has honed the ability to draw figures that aspire to realism: the elephant may look quite real, but drunk on mahua, it flies, and it is adorned with flowers. In him, the contemporary global world, and the demands it makes, have learnt to cohabit with a sensibility that invokes a primitivism that is at once modern, and reminds us of the world we all come from. He has experimented with ink and paper too, retelling Gond myths and stories of deities like Bara Deo and Dharti Dai. He describes the evolution of the media used in Gond art and its increasingly urban existence in an interview: ‘Earlier, we used mice hair in place of a brush, while limestone or charcoal were our colour mediums. Now, we use thin brushes and special pens to draw, and water, oil and acrylic mediums as colours.’

Art, for Venkat, is both an escape from, and a grappling with, the harsh realities that have become a part of our existence. Even as he remembers myths and legends that are being overrun by the surfeit of information in this electronic age, he reminds us that the world has barely changed, that time is not linear, that art can still produce magic. Venkat was awarded the Rajya Hasta Shilpa Puraskar by the Government of Madhya Pradesh in 2002. He is the coordinator for an animated film on a Gond folktale made by Tara Douglas, which won the Tallest Story Competition Trophy at the Inverness Festival in Scotland, 2007.

In April 2009, Venkat did a solo exhibition at the Indira Gandhi National Museum of Mankind in Bhopal. Having subsequently travelled and exhibited widely in India, Australia, Canada, Europe, New Zealand and the USA, Venkat has been exposed to a wide range of arts practices which have influenced his sensibility. In 2013, Venkat’s works were exhibited at Sakahàn: International Indigenous Art at the National Gallery of Canada, in Ottawa. Called the ‘largest-ever global survey of contemporary indigenous art’, Sakahàn, meaning ‘to light [a fire]’ in the language of the Algonquin peoples of Canada, featured artworks by more than 80 artists from sixteen countries and six continents who interrogated the theme of what it means to be ‘indigenous’ in the present world.

In 2015, Venkat was one of the artists who participated in the Kalpa Vriksha: Contemporary Indigenous and Vernacular Art of India project at the Asia Pacific Triennial of Contemporary Art (ATP8) at the Queensland Art Gallery. Kalpa Vriksha considers some of the most exciting and experimental artists working with the knowledge of these traditions today, capturing how traditional iconography and techniques have developed and how artists are using new styles to explore contemporary issues. In 2016, Venkat was one of the 12 Dalit and tribal participants in Literary Commons: Writing Australia-India in the Asian century with Dalit, Indigenous and Multilingual Tongues.

Venkat’s graphic autobiography, Finding My Way, was published in April 2015.

This entry was posted in ARTWORKS and tagged Venkat Raman Singh Shyam. Bookmark the permalink.
Venkat Raman Singh Shyam belongs to the tradition of Pardhan Gond art inaugurated by the legendary Jangarh Singh Shyam, his uncle. After apprenticing with Jangarh in the 1990s, Venkat worked a range of jobs – including as house painter, screen printer and signboard artist. He also was fortunate to be guided by the pioneering Jagdish Swaminathan. Since Jangarh’s death in 2002, Venkat has pursued a full-time career in art despite several hurdles. Having travelled and exhibited widely in India, the US, Canada and Europe, Venkat has been exposed to a wide range of arts practices which have influenced his sensibility. Venkat’s graphic autobiography, Finding My Way, coauthored with S. Anand, will be published in April 2015.