The Beneficent Radicalism of Prue Stent 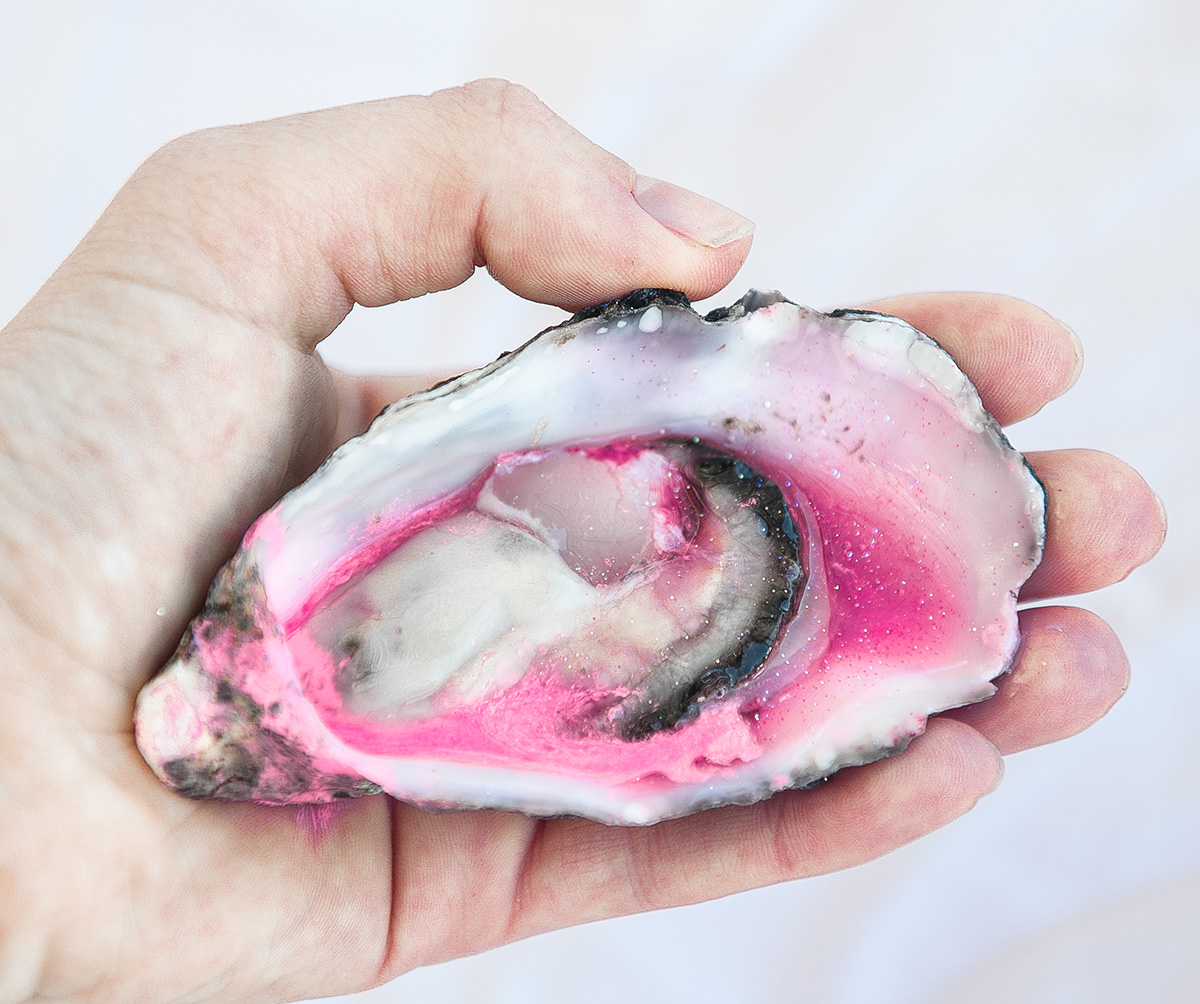 Prue Stent’s photography appropriates common icons of beauty and desirability into unknown and uncomfortable settings. Often bordering on the gleefully pornographic, Stent’s most provocative work takes aim at the aesthetics of heteronormative sexuality. In her Pink series we see the artist examine the female form on a plain of hyper-femininity, where garish pink slime drips down breasts, and fingertips clad in rubber washing-up gloves slide beneath silk undies. Stent’s Pink universe is one in which the woman is exceptional, her form transcending traditional power structures of phallic brutality, instead sublimating the pure power of self-expressive freedom into ebullient, liberated joy. The series is a brave push into a borderless world of personal sexual choice, away from those societal standards of ‘good and bad’that are inscribed on the human form. Stent’s photography is art that absconds from the rigidity of heteronormativity and patriarchal oppression, leaving behind with it all other asexual, apolitical rigidities of our society.

Breasts and nipples are consistent salient features of the Pink series, usually photographed apart from the faces of the women to whom they belong, and pink paint (often mixed with some thicker liquid for unctuous effect) slides off lips and fingers, drawing uncomfortably close allusions to the aftermath of a pornographic ‘shoot’. In one such photograph, we see the hips and legs of a woman lying on her side, with a slurry of pink and white liquid flowing out from between her thighs. There is a keen sense of humour present in the photo, as a thin hand delicately wipes up the ridiculously lurid and ambiguous mess, while there is also a definite sense of physical beauty and poised femininity to the scene. The dainty hand wiping at the fluid could possibly represent the imposed need for the erasure of physical signs of menstruation, or even an attempt to ‘clean’ oneself and become ‘ladylike’ again, after having been ejaculated onto. Here Stent evokes well-understood tropes of feminine abasement, and somehow robs them of their abasing qualities. Stent annexes these tropes back into feminine control with her unashamed, profane love for all things physically human, sexual and female. Stent’s eroticism is a kind of soft homo-eroticism which celebrates and normalises the sororal and vaginal, not so much elucidating the genital-fetishist’s desire to orgasm and dominate, as it is purely celebrating the greatness and beauty of exposed flesh. This is the eroticism of an artist who sees the asexual beauty in sex: carnal desire without that consumptive drive implied by the Latin root carnis.

It is important here to draw a distinction between an ironic allusion to damaging sexual tropes and a completely fresh awakening of unseen feminine homoerotic qualities that pass remarkably close to their abasing counterparts without ever becoming them. With certain exceptions, which could be dismissed as natural accidents of art that relays its message through slippage and condensation, Stent’s photography does not have the conscious, radical aggression of much other feminist art. Stent summarises her own work saying, ‘It’s kind of subverting your typical familiarity of something beautiful into something weird.’ (vice.com, 2015). One beautiful example of this is in a photograph of the artist’s free hand (the other holding the camera) cradling a shucked oyster, which glistens with a trail of translucent pink slime. The glistening oyster is a perfect symbol of a value object which is all-at-once loved, feared, desired and the object of disgusted. In the artist’s hand, however, the gentleness with which the hard shell is cradled, and the friendly luminescence of the pink slime create an inviting air, as if the slimy oyster is a child’s toy. More so, particularly when viewed within the context of the complete Pink series, it is impossible to ignore the vaginal qualities in the appearance of the oyster. In that way Stent presents the ‘oyster’ as something entirely approachable, loveable, cute. It is as if the vagina, cradled in Stent’s hand, never was that sacred object of Judeo-Christian scorn, and an entire history of hate and discrimination is expunged and rewritten through her lens. Her radicalism, then, is not that righteous and crucial antagonistic radicalism of many other feminist artists, waging war against the patriarchal machine by actively exposing the ugliness of male sexual domination. Rather, Stent’s radicalism is a calm beneficent voice, speaking to those of us who already know what uglinesses the world of gendered oppression contains, encouraging us to see more possibility for beauty in a new, less dimorphic world. Stent’s photography dissolves borders between good and bad, ugly and beautiful, so that we might see as she does. It is an invitation to open our eyes onto a utopic landscape of sexual freedom.

Throughout Stent’s artistic career we see a general trend: challenging norms of representation, be they representations of sex, domesticity, the natural world or even raw colour itself. Stent’s challenge to sexual representation in her Pink series runs so deep that it challenges the idea of basic sexual categorisation. Stent is not a straight woman, neither a queer woman, neither is she specifically a female in the sense of femaleness being understood in its dimorphic opposition to maleness. Rather she has flown away, no longer a mirror in which men or heterosexuals might see themselves reflected in chains of paradigmatic opposition. With regards to the rest of Stent’s oeuvre, we might even say that her norm-breaking in the Pink series goes even further than a rejection of normative sexual standards. Stent’s Pink universe has no regulatory codes whatsoever, other than a passive drive towards beauty. She has taken up and left our totem world, taking the value of its totems with her, including but not limited to those totemic binaries of sexuality and gender. Even the male-dominated standards of scientific categorisation are confounded by the artist’s new reality, where uncertainty and ‘play’ reign, so that a Nietzschean level of personal-agency is afforded to the viewer, deciding where and when beauty will be found, exercising a freewill that could never be enjoyed by those mired in the ‘reality’ of normativity. Through her work, Stent leaves all known systems of personally-diminishing nomenclature behind, from the plainly socio-sexual to the seemingly apolitical borders of ‘good and bad’. What’s even better, is that she invites us to do so with her.

This entry was posted in ARTWORKS and tagged Peter Clynes, Prue Stent. Bookmark the permalink.
Prue Stent is a photographic artist currently based in Melbourne. Her work is a co-mingling of sculpture, installation, moving image and photography, through which she explores the relationship between feminism, fetishism and surrealism. Her inspiration doesn’t derive from wanting to push a rational intellectual message or philosophical point of view, but instead from a perverse curiosity. Since graduating from a Bachelor of Art (Photography) at RMIT in 2014, she’s been involved in a short film and various collaborations with musicians, artists, fashion labels, magazines, including Oyster, i-D, Rush, Desktop and Vice. As an emerging artist she intends to continue on producing work in a collaborative team context, using photography in all sorts of ways, with all sort of purposes.


More by Prue Stent on Cordite Poetry Review →
Peter Clynes is a 21 year old student of Creative Writing at RMIT, currently on exchange studying Mandarin and taiqi in Tianjin. He has a few poems available online, otherwise look out for him at poetry slams around Melbourne.

One Response to The Beneficent Radicalism of Prue Stent