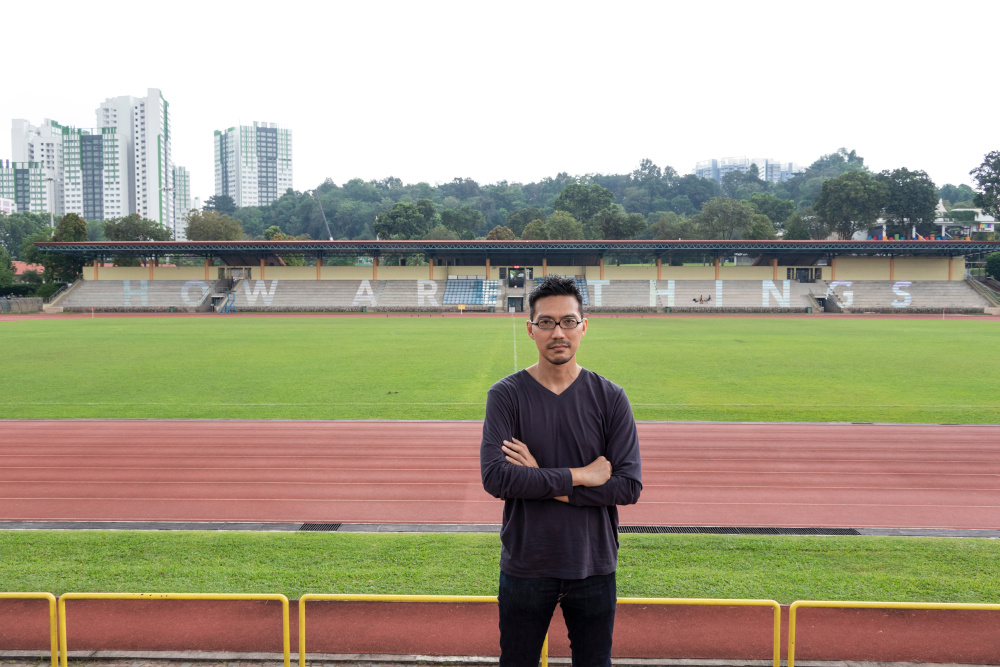 Michael Lee | How Are Things (installation view with artist), 2018

My artworks are personal reflections on city living, with a focus on how space structures human thought, feelings and actions. Researching architectural heritage addresses my own poor memory of places I’ve lived in and been to, which also benefits from and spurs my own speculations of spaces to come.

From 2010-11, I created ‘Second-Hand City’, a series of architectural posters featuring fictional buildings or cities. Among them is Shishitv Tower, which narrates the life cycle of a species of building that disperses its offspring via explosion. Architecture insiders may recognise the reference to contemporary architects here, and my intention is precisely to suggest that, try as Rem Koolhaas and Frank Gehry may to profess personal style and distinction from each other, there is continuity between them. I continued this fascination with how reality rubs against fiction, sometimes in wrong ways, in Notes Towards a Museum of Cooking Pot Bay (2010-11), a large-scale mind map of notes for a hypothetical museum that commemorates the past, present and future of Telok Blangah, a neighbourhood in the Southwest part of Singapore.

While on an artist residency programme at the Künstlerhaus Bethanien in Berlin during the city’s historically coldest of winters in 2012, I was struck by the paradox of solitude as both a state of precarity and a condition for production. I explored spaces of confinements and escapes by making diagrams, including the floor plan in Bahja Caves (2013) and the sculptural outline of a treehouse in Skeletal Retreat No. 1 (2013). Diagonals (2014), an interactive wall mural bearing the hazard symbol of black-and-yellow stripes, enacts the experience of having unknowingly entered a situation without access to the exit. “Planting Building” (2017), whilst revisiting lost buildings and topiary, also throws up dilemmas of growth, training and care.

My recent projects wonder about how to communicate with others for the sake of mutual flourishing. The large-scale text installation, How Are Things (2018), harnessed the subtle colour-and-tonal shifts of holographic stickers to address Woodlands Stadium users and MRT commuters with the titular greeting. In Friendly Strangers Party (2019), 100 pennant flags revisited the words or deeds of people whose identity I never ascertained but who have touched me in one way or another.

I hope my art captures in some ways the opportunities and challenges of urban existence, and suggests fiction not just as a form of entertainment but as a mode of survival.

This entry was posted in ARTWORKS and tagged Michael Lee. Bookmark the permalink.
Michael Lee is an independent artist and curator based in Singapore. He researches urban memory and fiction, especially the contexts and implications of loss. He transforms his observations into diagrams, models, environments, events or texts. Among his curatorial projects is what it is about when it is about nothing (2015) held in Mizuma Gallery, Singapore. He is currently observing the mood of Singapore’s art scene.


More by Michael Lee on Cordite Poetry Review →
Joshua Ip is a Singaporean poet, editor and literary organiser. He has published four poetry collections with Math Paper Press, won the Singapore Literature Prize for his debut, sonnets from the singlish (2012), and placed in three different categories of the Golden Point Award. He has edited nine literary anthologies, including the A Luxury We Cannot Afford and the SingPoWriMo series. He directs Sing Lit Station, an overactive literary charity that runs community initiatives, including SingPoWriMo, the Hawker Prize for Southeast Asian Poetry, and poetry.sg. He received the Young Artist Award from the National Arts Council (Singapore) in 2017.