← Waiting
by Alasdair Cameron
Do more, do better →
by Rae White 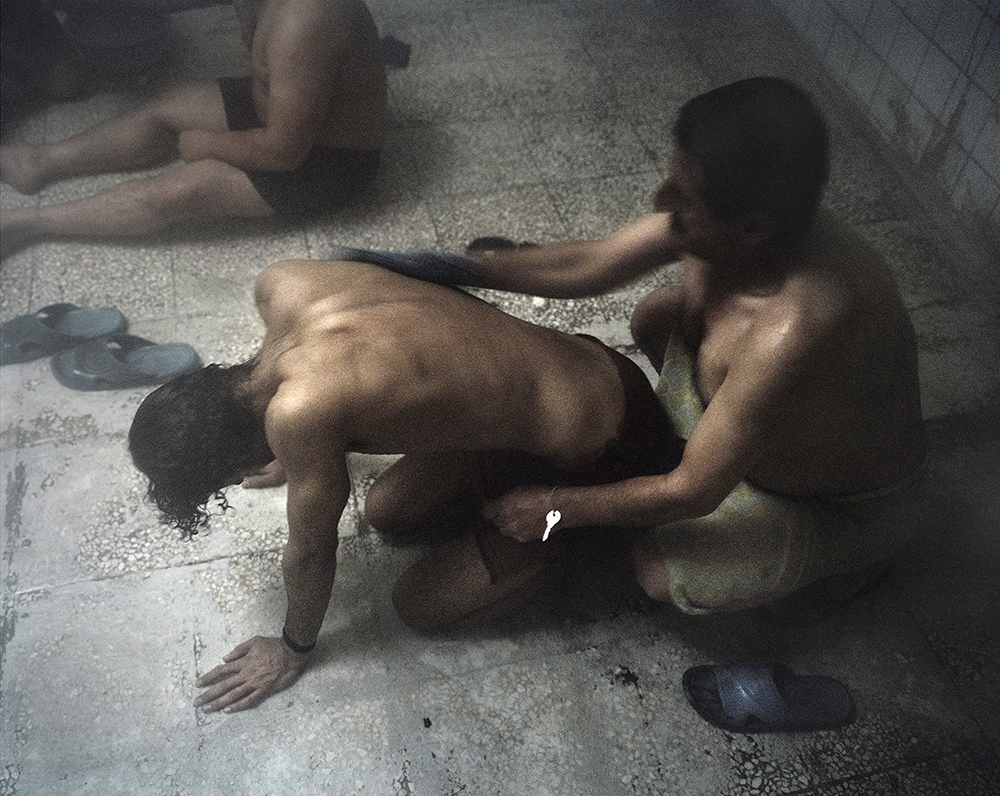 Behold was made unexpectedly, and without design. I was travelling in a city that I sometimes return to, and I got to know a group of gay men. There, where they live, these men (and many others like them) are mostly left to be. But only on the condition that they lead one part of their lives in secret. Rarely, that is, do their bodies ever meet in open honesty outside, in public. Only here, in this bathhouse, where their desire to be seen and embraced by others – just to be and to be held – is played out the partial openness of these four closed walls.

The bathhouse no longer exists. But while it still did, these men invited me to document it and a little glimpse of their lives in it. We arrived, but I was not allowed to enter. So we rented the place, and for a few hours I took pictures while these men played themselves performing their lives for my peering camera, in order that their desire to be seen might be realised, in part at least, here in the world of the images – in the act of beholding, where the bare thereness of life is transformed from mere appearing or appearance, into something more meaningful … into recognition.

In the Exodus, I Love You More

In the Exodus, I love you more is an ongoing series that I began in 2014. It’s a record of my changing vision of, and relationship to, my homeland, Iran – a relationship that has been shaped by my having been away. Distance is something that I embrace in making this series, rather than clinging nostalgically to my image of “home” or to a narrative of painful “exile”. I try to turn distance into a kind of seeing. To let what is both there and not there shine through the surface. To let the surface speak.  It is an attempt to explore the interplay of presence and absence in the history of Iran and in Iranians’ lives during a time of great transition, and to discover the truth that lies there in their never-ending meeting, in-between.

Under Western Eyes (2013-2014) is a series of manipulated studio photographs that combine, in pop-art style, familiar signs of Islamic identity to challenge the dominant representations of Islamic women that circulate in Western art galleries. Through pastiche and redeployment of these familiar signifiers, this series attempts to locate the origin of these representations, and the reason for their predictability, in the Western gaze. Thus, these images aim to critique, through mirroring back, a certain audience expectation and desire in relation to how ‘the female Islamic subject’ is seen; for it is this expectation that partially explains the recurrence of the same few signifying elements in the works of Middle Eastern artists – above all the veil. The central idea, then, is that such (self) representations often depend on, and thus re-produce, familiar signs of ‘otherness’ that cater to Western viewers’ and the art markets’ demand for ‘Islamic’ artworks that highlight their cultural difference in safe and predictable ways. At the same time, such representations also serve to position the Islamic subject in relatively fixed ways vis-à-vis the ideal type of Western viewer. She is oppressed, tradition-bound, and inferior, but secretly – beneath the veil – ‘just like me’: i.e. fashion-loving, rebellious, and sexually-free.

This entry was posted in ARTWORKS and tagged Hoda Afshar. Bookmark the permalink.
Hoda Afshar is an Iranian born artist living and working in Australia. Her practice reflects on issues related to the politics of representation, marginality, gender and displacement. In 2015, she won Australia’ s National Photographic Portrait Prize. She’s currently completing a PhD in Creative Arts at Curtin University and also lectures in photography.