← Tunnel Vision
by J S Harry
Ekphrasis as ‘Event’: Poets Paint Words and the ‘Performance’ of Ekphrasis in Australia →
by Dominic Symes 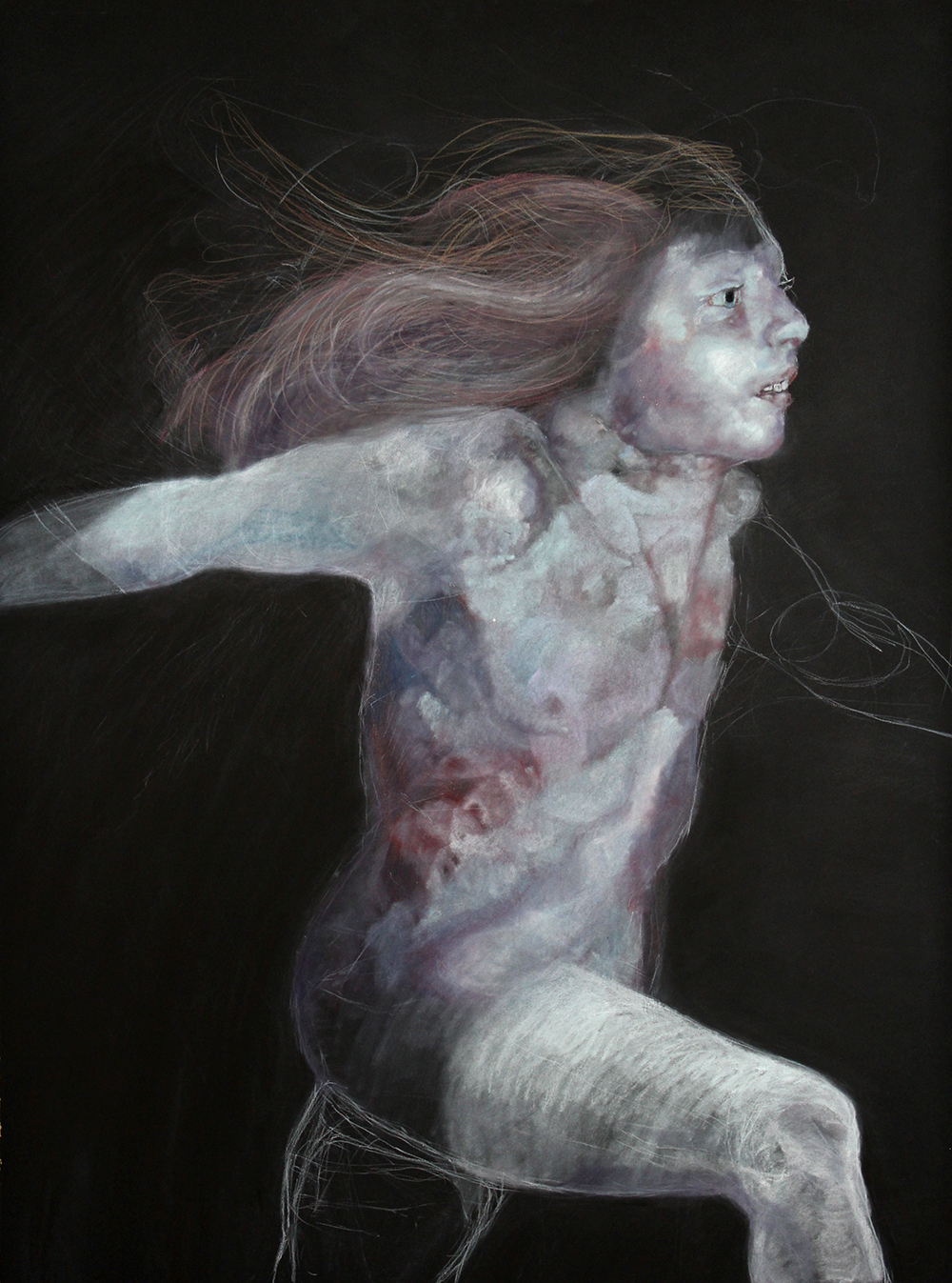 I’m not a story teller. I’ve never been interested in bringing context to my portraits. They float in a dark absence of context, in vivid expression and psychological space. I recall some years ago, a lively discussion with another creative. Their supposition was that one should be able to be isolated on a desert island – a cultural, social and historical vacuum – and in that lack of art knowledge and context, be able to intuit its quality. In other words, art should have an inherent quality and merit about it that speaks to the viewer. I think this common sentiment underestimates the strength offered uniquely in the visual arts. While other creative disciplines may rely on the knowledge of the audience to pick up on references, in my work, I don’t require them to. Instead, I rely on the preconceptions a viewer has been indoctrinated with through consistent imagery they’ve been exposed to in advertising, television and movies and to some extent, literature. The notion of childhood innocence and lack of autonomy was created socially, in conjunction with images of children in white; barefoot and connected with nature, pictured with animals that share psychological qualities. Our conception of children continues to be linked to their visual representation – a diversion from this, whether the viewer is aware of it or not, will be disconcerting. Art has the capacity to move a viewer towards a feeling while also mirroring the society that has shaped their reaction and view, and illuminating preconceptions they may not be aware that they have – illuminating insight through an emotional experience of the work.

Art is the understanding of the world that you and I occupy. It’s understanding the moral narratives, the colour associations, the social and visual history we have inherited, and the response an image may engender inside of the viewer. That is what excites me about the art I admire and the art I make.

The subject of my work is one child, a family member in a seven-year series, and of her seven-year life. As a young woman of childbearing age, it might seem an obvious choice for me to draw children; there was a time in art history where women were limited to drawing domestic scenes of children and animals. But their social identity became synonymous with innocence and a lack of autonomy. It is this association and expectation of the depiction of children that has led many female artists (Marlene Dumas, Sally Mann and Cherry Hood) to use confronting portraits of children as a vehicle for unexpected emotion. I live for the remark ‘your work disturbs me, but I cannot explain why.’ This is often said apologetically. But the visual arts offer a pathway to communicate conflicting and ambivalent feelings and ideas that literal language cannot. A viewer’s reaction to a work often unfolds itself from the inside out, where emotion leads to insight.

Though I intend for the work to engage the viewer as they experience it emotionally and psychologically, it is also important to consider accompanying information to be consistent with the conceptual and atmospheric qualities of the work. I don’t want the title of the work to limit the way it is interpreted. However, particularly as an exhibition, I want the series to be able to offer more as it is revisited – to be more than just a visual communication, a succinct juxtaposition of ideas. For example, the February 2017 exhibition at Lindberg Galleries, Child of the High Seas. It draws its title from a collection of short stories for children on the subject of death, written by French writer Jules Supervielle. The title story, ‘Child of the High Seas’, is a haunting and ambivalent fable of a child who lives on an island in the middle of the ocean, with artefacts of a life yet no memory of it. This child is the echo of a child that once was, and is suspended in this situation as a manifestation of the intense grief a sailor felt for his late daughter. This story has influenced my work significantly. I discovered it through one of my greatest art influences, Joy Hester – in fact, I’m influenced by her entire circle of post-World War II portrait artists, The Angry Penguins. Hester named a drawing after Supervielle’s Child of the High Seas. As French poet Paul Valery noted in Things Left Unsaid, ‘Nothing more original, nothing more oneself than to feed on others. But one must digest them. The lion is made of assimilated lamb.’ We are all broadly created by the assimilated lamb that has been available to us in the society in which we live. Artistically, Hester digested the work of Supervielle, and seeing something of herself in it, created something new. I, in turn, have been granted with both Supervielle’s work, as well as what Hester gleaned from it.

And so we return to the matter of giving a title not only the exhibition as a whole, but in naming portraits individually. Each title is a disembodied fragment from poets that influenced Supervielle, giving a nod to a creative lineage that led me to Child of the High Seas. I isolated lines that relate to the corresponding themes of the short story and my work more broadly – death, and the way it transforms us as living beings, change, regret, absence, grief and gender. Also in these titles are references to the ocean, acting as a symbol, and a link to the exhibition title. Each line transformed through the context of its pairing with a portrait, drawing further meaning as a list of titles, and as an exhibition as a whole.

The works have a dialectical nature, and a tension between being disconcerting and appealing.

They also sit between categories when it comes to the disciplines of drawing and painting. They engage with colour, form and layering in the way that painting does. And yet, they also encompass the impulsiveness of sketched line and mark-making, the treatment of absence and negative space, as well as the celebration of organic, skin-like paper – all qualities characteristic of drawing. It is the immediate purpose for which it is being used that will define their category. If, in an exhibition of paintings, they would be paintings. So, too, if curated with drawings. However, contemporary art practices rarely land in one discipline, with many artists that could be described as sculptors / drawers or drawers using paint. Perhaps such distinctions are relevant predominantly for administrative purposes. Whether my portraits are described as drawings or paintings may depend on the person viewing them.

My luminous soft pastel portraits of a child emerge out of black paper. There is conflict between colour and form, absence and sketched line. At my inaugural exhibition at Lindberg Galleries (March 2-18, 2017), you will find yourself surrounded by these disconcerting figures. The colour palate is bruised, bodies are poised in strange positions, visceral fur crawling up shoulders. From some portraits, eyes will watch you intently. In others, there is an absence of eyes. Each work engages your personal baggage, thoughts, your feelings. As a series in exhibition, they will create the experience of different entities haunting you from all sides.

This entry was posted in ARTWORKS and tagged Joy Hester, Jules Supervielle, Merryn Sommerville. Bookmark the permalink.
Merryn Sommerville is based in Bega, regional NSW. She is the recent recipient of the Basil Sellers Prize, as well as the previous recipient of the Spanish Embassy's Torres Travelling Scholarship, the inaugural Spotlight Exhibition Award at the Canberra Museum and Art Gallery, and the Ampersand Duck residency with letterpress artist Caren Florance. She is represented by Lindberg Galleries.