Processes used to translate concrete poetry are often very transparent about the translator’s need to take measures to preserve the creative and critical intentions of the source poet. Translators of concrete poetics must negotiate with very strict requirements of structure and may not even be able to render the entire text into the new language. The English-language edition of Seiichi Niikuni’s concrete poetry is a delicate reproduction of the original Japanese texts, with explanatory notes and a translation key at the base of each page, identifying the kanji used and giving the English name of each poem. Japanese poet and painter Seiichi Niikuni (1925-1977) published only one collection of densely structured concrete poetry during his lifetime, titled Zero-On. His manipulations of language and poetic structure lapsed into obscurity, but were recently revisited in a retrospective exhibition in 2008 at the National Museum of Art in Osaka. Niikuni’s wife, Kiyo, who also suggested the name for Zero-On, directed the compilation of Seiichi Niikuni: Selected Poems, to which this paper refers, and provided the translation keys and titles.

The concrete poetry movement officially gained its name and momentum in the 1950s, particularly in Brazil, but its origins can be traced back to several ancient sources, including Greek ‘pattern poets’ and Chinese writers.1 Seiichi Niikuni was one of Japan’s foremost figures in the concrete poetry of the 1950s, but other prominent poets also included Kitasono Katue, and later Yoshizawa Syoji in the 1960s.2 Mike Weaver claims that there are three types of concrete poetry:

Niikuni’s poems tend towards the ‘optic’ scale of this definition, inviting engagement with the strategic placement of each kanji, as well as the meaning of the kanji itself. Most poems only use one or two kanji, repeated in various patterns, engaging with each other and also with the white space of the page. Each character interacts with one another visually as well as syntactically, often appearing in large squares or rectangles on the page, as in the poem, ‘rain’: 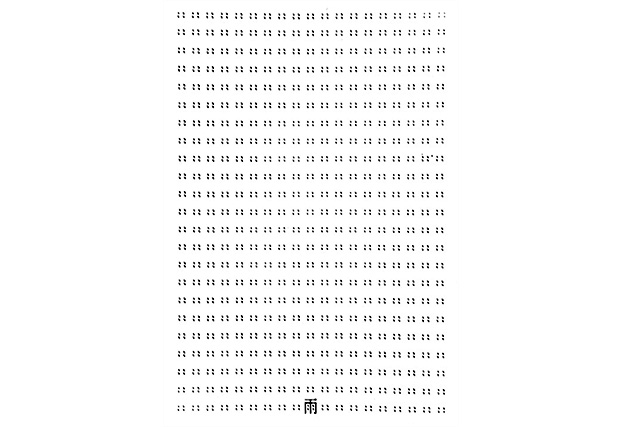 To a non-speaker of Japanese, the piece may visually appear to show a small house-like structure, engulfed by raindrops. Upon closer inspection, the ‘raindrops’ are revealed to be part of the kanji for rain. The pictogram depicts a cloud with drops of rain falling from it; the cloud is drawn first in calligraphy, then the four raindrops dotted in with the brush. The kanji is usually pronounced ame. Eugene Wildman uses ‘rain’ as a prime example of how concrete poetry works:

Concrete Poetry aims in general at the ideogrammatic state. The poets pattern the letters of words in much the same way that a Japanese calligrapher patterns the strokes of a character. By no means, however, are all Chinese characters pictures of things they represent. Language is not that simple, and this is a too-popular fallacy about ideograms. In the poem ‘rain’ the calligrapher Seiichi Niikuni became the poet Seiichi Niikuni when his design was able to achieve the identification between the word-as-picture and the word-as-sign. A Chinese character is not, by itself, a concrete poem. It requires the presence of an artist who will do something with the material.4

The poem is structurally strict, each partial kanji restrained within a form that is higher than it is wide, giving a sense of elevation and also diminishing the relative size and scale of ame. The fact that the kanji for rain is surrounded by raindrops could suggest entrapment, but because the rain is constructed from segments of the kanji itself, a sense of freedom or escape balances out such oppressive connotations. Lacunae appear structurally and symbolically in this poem, evident in the poem’s central location on the page, leaving much of the space blank, and the breakage of ame into ‘raindrops’, splitting away from the original kanji.

Like Niikuni’s other poems in this translated collection, ‘rain’ is presented with a small translation key, as Kiyo Niikuni acknowledges that rendition into English would lose the poem’s elegance and meaning, and instead treats each poem as a visual art piece, with a small amount of explanatory detail at the base of the page. Further detail about how each kanji is formed, its pronunciation, and etymological concerns would be beneficial, but have not been included, leaving readers to independently pursue further information. However, due to the outward simplicity of Niikuni’s work, this does not inspire a sense of alienation; rather, it fosters desire for further understanding. By not directly manipulating the original poems, Kiyo Niikuni’s ‘distant’ approach to translation places the translator on a similar level to a non-speaker of Japanese. The translations appear to be small concessions by the original poet due to their limited detail, rather than the translator, inviting further research and encouraging a sense of inclusion between translator and reader. Though this approach is far less overtly influential or creatively adaptive than that of other translators, Kiyo Niikuni’s English-language rendering of Seiichi Niikuni’s poetics is representative of a style that does not demand that translation be immediately ‘familiar’ to its new audience. Instead, lacunae within the concrete poems are preserved, and so too are the ‘gaps’ between the new audience and the original, linguistically-equipped recipients. Kiyo Niikuni’s translation keys represent small ‘bridges’ between these two groups, placing the onus on the reader to engage, rather than passively await new information. It is this sense of personal responsibility and refusal to completely colonise the original text with the new language, yet still offer leads for new readers to follow, which should be considered by other translators in producing further works.

Pages: 1 2 3 4 5 6
This entry was posted in SCHOLARLY and tagged Anne Carson, Ernest Fenollosa, Eugene Wildman, Ezra Pound, Gayatri Spivak, Henri Meschonnic, Hugh Kenner, Lawrence Venuti, Li Bai, Marceline Desbordes-Valmore, Maria Tymoczko, Mike Weaver, Paul de Man, Sappho, Seiichi Niikuni, Siobhan Hodge. Bookmark the permalink.
Siobhan Hodge has a PhD in English literature. Her thesis focused on Sappho’s legacy in English translations. Born in the UK, she divides her time between Australia and Hong Kong. Her chapbook of reflections on Sappho, Picking Up the Pieces, was published in 2012 as part of the Wide Range Chapbooks series. She is currently the Reviews Editor for Writ Review and an Associate Editor for Rochford Street Review. She has had critical and creative works published in a range of places, including Westerly, Axon, Contrapasso, Peril, Plumwood Mountain.