My third pause carries me to Kangaroo Island. As I cross from mainland to island, I think of Ngurunderi – one of the Ngarrindjeri’s ancestors. Pursuing his two fleeing wives, Ngurunderi called for the waters to rise and drown them. The terrestrial path between mainland and Kangaroo Island was submerged. Whalers also inhabited the island nearly 40 years before the official settlement of South Australia in 1836. They took their kidnapped wives along with them – another reason to hear mourning cries echo over the tide. Illness spreads as old connections are severed: arrhythmia has rolled over the waves. 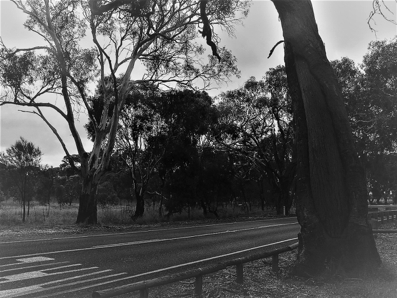 Music has been composed with and for these shadow places, to use philosopher Val Plumwood’s term; music which aims to hear (or recover) resonances despite rhythmic disfigurement, and to recuperate life-sustaining polyrhythms. Artists engage in composition processes which require transformative exchanges and interactions across and beyond ethno- and anthropocentric boundaries. Translation stands at the root of their creativity. Composers such as Becky Llewellyn and Chester Schultz repeatedly engage with and transcribe anthropologist Norman Tindale’s 1932 recording of Clarence Long (Milerum) with permission and / or guidance from Ngarrindjeri Elders. Other composers, such as Barry Conyngham and Dave Dallwitz, use progressive sound distortions to conceptually mimic environmental factors and their transformation due to colonial intrusion. Their compositions act as records of change. They retrieve and revisit shards of histories buried in the waters; and translate them acoustically to render them audible again – to open them to interpretation. Musical creation is redefined as a form of recuperative and restorative collaboration whose aim is to (re)compose1 the waters of Lower Murray Country through rhythmic accumulations and proliferations of ontological significance, as both the environment and its traditional custodians contribute to its formation. Such music responds to the need to recognise ‘denied places by owning multiplicity, envisioning a less monogamous ideal and more multiple relationship to place’ (Plumwood). It resounds the environment sustainably; or more precisely, (re)sounding watery environments develops knowledge and awareness around these environments, which in turn enables sustainable connections and relationships.

Since 2010, the ancestral river ceremony Ringbalin has been revived on the initiative of Ngarrindjeri Elder Major Uncle Moogy Sumner. It aims to regenerate and revitalise Murrundi / Murray River’s waters and peoples. For this purpose, dancers and musicians journey down Country, and perform traditional songs and dances along the way. Its revival marked the end of the Millennium Drought. As dancers stomped the ground and musicians made the air vibrate, rain fell. I was there for it in 2017. 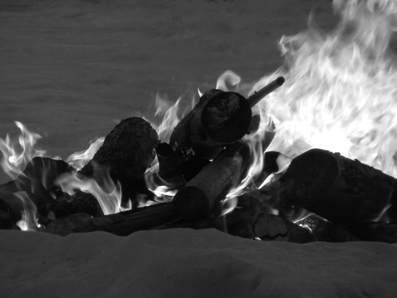 Rain falls again. The wind renders it piercing, and icy drops stab me through my raincoat. The warmth of the fires surrounding the performers cannot reach me. These fires are so contained that they barely light the rushes behind them. I sometimes catch a glimpse of the waters hidden within their dancing daggers of light. An opacity that is beyond what I can see is revealed: I must learn how to listen to ineffability differently so that I can hear overwritten rhythms. Clapsticks ring hard against my ears. I forget whether they beat with the dancers’ feet or the lapping flickers of shaking waters. This is where Ngurunderi crossed over. I hear it loud and clear when he speaks: as people nurture Country, Country nurtures them. Ecological and socio-cultural worlds collide in reciprocal and entangled processes of care. Ill bodies have caretakers.

These caretakers regroup and join forces. The Ngarrindjeri draw on previous and / or existing actions taken by other First Nations: occupancy mapping; cultural flows models; UN and Ramsar conventions. These empowering exchanges map a chorography of connection, rather than disconnection. Indigenous studies scholars Stephen Hemming and Daryle Rigney describe this as ‘an Indigenous form of glocalisation which draws on the power and flows of international alliances creating new agendas and valuing old ones’ (761). Waters, and concerns about these waters, also connect Indigenous and non-Indigenous people, who come together to protect them. As cultures and cultural materials (inter)react, a slow, global melody of awareness rises from the waters; a humming which provides a pathway to compensate for their silencing. This relational component is at the heart of strategising how to (find space to) express diverse, polyphonic relationships with waters, in a society where waters’ musicality tends to be reduced to a monological trickle. It facilitates flooding, where floods are to be regenerating tumults of cacophonic voices mixing and separating through currents.