Forward implies journeying. Let me return to the 1830s: I am back on the colonial theatrical stage. I take my second pause on top of Goolwa Barrage, one of five barrages enclosing the Mouth. I find it difficult to dance to silence. There is not much to hear, beside the deafening quietness of the concrete and metal protruding from the waters like gigantic unmarked tombstones. Perfectly aligned, they conduct and delineate sound. The river, Lake Alexandrina and Lake Albert stagnate and disintegrate into silence on one side; the wind of the Coorong and the sea noisily pound in the distance on the other. I face away from the sea. Pelicans and black swans glide across the still sheen of Lake Alexandrina – it is sunset, and life is silver. 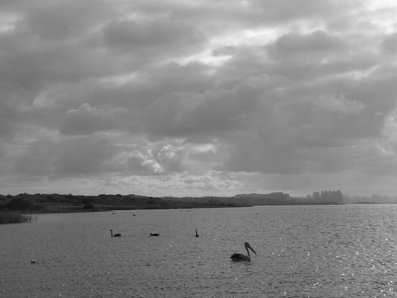 Plastered notes and lyrics ring over these glistering waters. Colonial songs project the audience into a carefully crafted space: gentle and quiet waters framed by picturesque weeping willow trees sparkle passively under the sun so as to carry settlers’ epiphanies and dreams. Transposed musical styles finish bending Australian waters into European rhythmic folds. New rhythms lead to new behaviours: Australian waters are made compliant. Such musical construction and constriction provide a stage befitting for (imaginary) colonial projection and subsequent (physical) manipulation; and these have been replicated over most colonised bodies of waters worldwide.

From the mid-1880s, arguments over the Lower Lakes’ poor environmental health regularly surfaced in newspaper columns, and government agencies’ reports. The lack of river flow due to excessive upstream water extraction meant that the sea intruded further and further: fresh waters turned to salt. The colonial solution consisted of erecting five barrages between 1935 and 1940. Conceived with a practical (read: neo-colonial capitalist) purpose in mind, these barrages have been shaping the sonic environments of Lower Murray Country for nearly 150 years. Its waters can no longer sing in tonalities that are not those of European waters.

The names are: Goolwa, Mundoo, Boundary Creek, Ewe Island and Tauwitchere. Together, these five maestro barrages orchestrate the sonic death of Murrundi / Murray River’s waters as they reach the Lower Lakes. Over the last three years, I visited them several times. I needed to make sure: the concrete and metal are real, and they blend watery horizons into a singular piece of engineering.

A total of sixty gates dot these five barrages. On average – and more often than is sustainable – barely any are open. When it happens, though, beautifully organised and equidistant waves flow through. Clearly delimited by concrete and metal bars, their volume is engineered: from pianissimo to fortissimo at the push of a button which conducts the waters, day and night, night and day. The changes in the rhythmic character of these waters alter their metrical nature, and that of adjacent watery environments. Their music becomes measured, fine-tuned and controlled to suit the ongoing performance of the colonial act of ‘discovery’. The unending repetition of such a performance is not without physical consequences: lived terrains are d(r)ying. Such a design is effectively turning Australia into the silent continent that settlers thought it was. For it is easier to speak over silenced entities – it does not require yelling. The barrages stand proud and tall. As design theorist Tony Fry summarises: ‘designed things go on designing’ (3). The sonic impact of such a continuation is so loud that it becomes barely audible: silence keeps on silencing. I feel, rather than hear, the detonating calm of stagnant water surfaces. I am breathing air, and it melts into these waters as much as into my lung alveoli. Muted bodies of waters become ill bodies. Eulogies are composed – eerie echoes generated by the keys and strings resonates in my chest (Richard Coates Quintet). And author Aldous Huxley writes: ‘After silence, that which comes nearest to expressing the inexpressible is music.’

Lungs full of waters scream: they suffocate. Tubes and monitors record these oppressive rumblings. They are confronting. Voices flow with air: silence translates an absence of flow, a blockage of airflow. Flows are the breath of waters. Around the Mouth, technology mostly records silence. There, data does speak in ‘quiet conjecture’ (Dyson 149). Measuring points register absences – of flows, of species, of freshness. Barely any water gushes through the Mouth. Its sealed banks are shaken by sea waves rather than by river currents. Wind dominates this engineered sonic environment of silence. It bites my ears ferociously.

These five barrages are supported by over fifteen major structures scattered upstream. Environmental degradation seems to grow exponentially – the further downstream I travel, the worse it becomes. I read the signs next to Goolwa Barrage. The shaping of sound by these barrages is a performative technique – along with their maps and names. I am a tourist, and I am allowed to walk on it until its halfway point. Seals rest on its boulders. This is a public space. 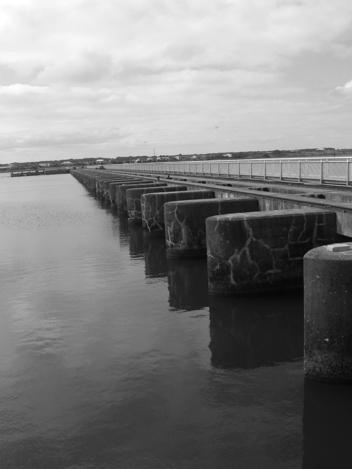 Design – like any cultural product – is an ontological practice: it represents the materialisation of a world-shaping imaginary; a force that governs sonic environments, obscuring some frequencies to develop others. Public space’s design should remain unfinished, multivocal; competing and converging discourses should fill the air: this would also make it politically active. It should, above all, be ephemeral. Yet, the design linked to colonial practices of water management in Lower Murray Country performs in the opposite way: it encloses space, severing connections to elsewhere; it silences voices in favour of a monological grand verbal delirium anchored in western aesthetics. It freezes and binds what it touches to enforce predictability. As it ‘go(es) on designing’, it becomes increasingly difficult to perform outside of the auditory framework that it imposes on these watery environments – to perform beyond the ongoing repetition of the colonial act of ‘(re)discovery’. The structures dotting the river are a failure of design to recollect what was/is already (t)here. Rather, they create something relatively new within Lower Murray Country’s watery environments: environmental arrhythmia.