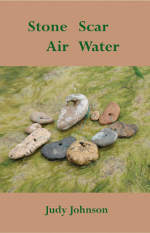 Driven by elemental themes and images, Stone Scar Air Water derives its title from this collection’s penultimate poem as well as from the four sections that, albeit in different order, comprise the book. For Judy Johnson, ‘scar’, or scarring, its lines drawn by history and inheritance, joins the ranks of stone, air and water.

The poet’s long-held interest in history is everywhere in evidence. As Martin Langford notes in his cover blurb, this entails, in part, a shift to poems that invoke the poet’s personal history – or at least, proffer an outwardly autobiographical, first person voice – alongside other, sometimes narrative, poems that draw on the historical archive. As with Johnson’s previous collection, Navigation, the wider world is often brought to bear on individual lives.

The collection, an important addition to this fine poet’s oeuvre, is also notable for a number of poems and sequences based on time the poet spent in rural Ireland. In this, Johnson treads a similar path to compatriots such as Robyn Rowland and Diane Fahey, who have drawn on extended periods in Ireland’s counties.

The elegiac opening poem, ‘Words, after an absence’, is a kind of prayer or injunction on how to live:

Its quiet urgings are also self-reflexive:

One could read this as a more restrained, more literary ‘Desiderata’, but the poem’s last line, ‘Try harder to do no harm’, recalls Philip Larkin’s ‘The mower’: ‘we should be careful // Of each other, we should be kind / While there is still time’.

The excellent ‘Picnic at Blackbutt’ follows, where ‘The ghost of an Apex fundraiser / perfumes the air’, to be succeeded by poems variously engaging with ‘air’, as per the title of the book’s opening section. Sometimes, as in ‘Dance of the worker bee’, the subject is the natural world and, equally, the narrator’s attempts to fathom its conduct. More forebodingly, many poems describe moments of daring and romantic flirtings with death. Cliff faces fascinate Johnson. Leonardo Da Vinci dreams of his sister, clad in calico nightdress, plunging to rocks. The next day, pragmatically, he ‘sets to work on a man-mounted net’ and writes Codex on the Flight of Birds. The marvelously (and in subject, literally) dark ‘Blind man’s bluff’, set on Ireland’s Cliffs of Moher, has the wind or ‘torturer’s apprentice’ slap human ears before the night is ‘tying a knot in the blindfold’ and ‘[You] [l]et the air spin you around / three times / and then start walking’.

Cultural histories are imagined in ‘The photographer Francis Bacon and Sylvia Plath stalk big game in Equatorial Africa’, which juxtaposes Plath’s ‘The arrival of the bee box’ with a charging rhino to tell of the imagined meeting between the two protagonists; and ‘Black hellebore (or Christmas rose)’, which sees a conjunction of personal terror with global wipe-out.

‘The kites of Ma Chia-shu’, closing the section, suggests a quieter releasing of the self to mortality.

The ‘Scar’ section includes poems that might loosely be described as ekphrastic. Sources range from contemporary art to Chinese woodblock to Michelangelo. Art and its practice, though, become a means to explore personal and national histories. Chief among these is the extended sequence ‘Michelangelo’s daughter’, wherein the sculptor realising a figure from a stone block becomes analogous to a sexually abusive father ‘releasing’ ‘daddy’s little girl’. Told from the point of view of the traumatised daughter, this could invoke heartfelt but overdrawn Pygmalion-like metaphor. Instead, Johnson delivers with consummate imagery and occasional wry understatement, melding the Renaissance with the quotidian, right down to the hospital room with its portable TV hanging in the corner on its insect arm.

The ‘Water’ section is dominated by two fine historical sequences. ‘The navigations of Rose de Freycinet’ sees the protagonist, dressed as a man, stow away on an 1817 scientific expedition to the South Pacific. ‘The last days of Mary Watson’, set in 1881, has a woman, her child and a wounded Chinese workman fleeing their island in a pot used for boiling sea slugs after the woman suspects further attack from mainland Aborigines. Both sequences involve a resourceful female protagonist dealing with extreme adversity. The Mary Watson sequence in particular, episodic and strong in narrative drive, is a kind of verse short story that still delivers forceful images – including of the injured worker, backlit and staggering, who ‘looked like / some amazed chinese version / of the Christ’. Filled with pathos, the poem avoids imposition of 21st century sensibilities onto historical characters.

In the final section, ‘Stone’, the sequence ‘Irish stone’ moves from county to country, the medieval meeting the modern, centuries-old histories crashing against more personal contemporary ones. Neither the past nor the present are sentimentalised: the visit to County Antrim, for example, reminds that Dunlace Castle was a site of massacre and multiple tragedies. The final two poems close the collection fittingly. The title poem, written after the Tang Dynasty poet Wang Wei, is a delicate end-of-day, end-of-season mourning that in its final couplet conveys the inevitable failure of poeticising the self cast blissfully adrift. It echoes the impossibility of the writing project conveyed in the opening poem. The deft final poem, ‘Loom’, riffs once or twice on the machinery of weaving but speaks of mortality looming towards us in a darkening season. ‘Deaths are hatched in Autumn’, we are told, when ‘the thin antennae of all deciduous stalks / turn to relinquishment’. So too the narrator at the poem’s affecting closure:

This entry was posted in BOOK REVIEWS and tagged Anthony Lynch, Judy Johnson. Bookmark the permalink.
Anthony Lynch writes fiction, poetry and reviews. His work has appeared in The Age, The Best Australian Poems, The Best Australian Stories, Island and Southerly, and been read on ABC Radio National. He is a frequent reviewer for Australian Book Review and The Australian. His short story collection Redfin (Arcadia) was shortlisted for the Queensland Premier’s Literary Awards, and his poetry collection Night Train (Clouds of Magellan) was runner-up in the 2012 Wesley Michel Wright Poetry Prize. He works as an editor with Deakin University and is the publisher for Whitmore Press, specialising in poetry.